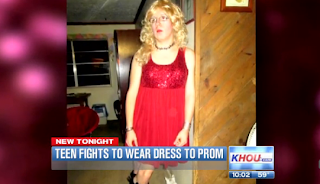 Transition, a shared experience for for trans people. We all been through what Tony Zamazal is experiencing internally right now. Tony is in the very first stages of transition having recently come to terms with her gender diversity and a irrepressible need to express it, or as we call it in our community, living authentically.

Sadly in Texas we are discriminated against in all phases of transition. For a trans person that is a life long hardship as we never stop growing and learning more about who we are.

Tony Zamazal has been told by the Spring ISD that the 'dance dress code' disallows her from wearing a dress because she was born a biological male.

I couldn't find a policy specifically for prom attire but I did locate the Spring ISD Dress Code which has no provisions for transgender students:

Students shall be dressed and groomed in a manner that is clean and neat and that will not be a health or safety hazard to themselves or others. The District prohibits any clothing or grooming that in the principal’s judgment may reasonably be expected to cause disruption of or interference with normal school operations.

*Trigger warning. I have used female pronouns when addressing Tony Zamazal because she has indicated she is transitioning from male to female. This video uses male pronouns repeatedly as if to add an explanation point, reinforcing patriarchal Cis~normality.

Posted by planetransgender at 10:55 PM No comments: Links to this post

CBS 5 reports that the haters were out in numbers last night extending the city's meeting until the wee hours. Joe La Rue who's Scottsdale AZ group "Alliance Defending Freedom" which calls the ACLU a "Radical anti-Christian group" was present. He claimed the law would give "an open door to any sexual predator, not the transgender community, but any sexual predator that pretends to be transgender. That person can go into the women's restroom and this gives them easy access to women and, especially, children."

La Rue's effort to instill fear was unfounded as it was noted that Tuscon amended a similar law to include LGBT people in 1999 and according to city officials there have seen no instances of predators using the law as a pretext for preying on woman and children in restrooms.

Mayor Greg Stanton issued the following statement today on phoenix.gov after the passage of the updates to the city’s non-discrimination ordinance:

"Bishop Kirk Smith of the Episcopal Diocese of Arizona said he thinks calling the proposal the “bathroom bill” is a way to play on individuals’ fears. They remind him of the scare tactics that were used when it first became illegal to discriminate in housing based on race, he said."

According to the DowntownDevil many Local Phoenix business were present in support of the amendment "along with neighborhood groups including the Evans Churchill Neighborhood Association and the Downtown Voices Coalition, a downtown advocacy group." It wasn't a easy go for fair minded people present, in fact it was traumatic as noted by Kim Pearson a <>outspoken advocate of transgender children's rights on Facebook: "Good Night cruel world! By cruel world I specifically mean the horrible, hurtful people who were saying vile things about transgender children today in down town Phoenix. If your God thinks my son and I are sinners, I don't even want to imagine what your God must think of the things you say and do. Put a fork in me, I'm done!" I will borrow Kim's favorite saying now: For the Kids!

Posted by planetransgender at 10:29 AM No comments: Links to this post