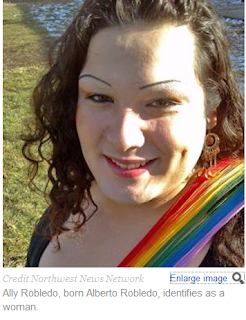 Ally Robledo a Transgender Woman from Lewiston ID was shopping for groceries and nature called. Seems ordinary enough. But her shopping trip ended suddenly as was given a no trespass order after two cisgender woman complained to management about a 'man' in the bathroom.

Ally wasn't bothering anyone, the cisgender woman recognized her as transgender and used that knowledge to hurt her.

Robledo was given a no trespass order Monday night shortly after exiting the Rosauer's grocery store location in Lewiston according to KlewTV "A male subject who was using the female restroom, and that made some women customers uncomfortable because of the appearance that a male was using their restroom," said Lewiston Police Captain Roger Lanier.

“So when I use the female restroom, I feel more comfortable, I feel like a lady," Robledo told North West Public Radio. "I don't invade anybody's privacy and for them to bring that out in a no trespassing order is just humiliating.”

The 25-year-old trans woman claims the Spokane-based grocery chain violated her civil rights, and she’s looking into a lawsuit. Idaho law does not outright prevent businesses from denying service to someone based on gender identity or sexual orientation.


Posted by planetransgender at 10:38 PM No comments: Links to this post Trigger Warning: Extreme Violence In a staged attack a young trans girl beat up another trans person in a bathroom. I am using the female pronouns despite the Bangkok's use of male pronouns because both of the people were dressed femininely. This was a planned attack, set up to be recorded. This was a crime. The antagonist knew the victim would not fight back. I don't know the laws in Thailand but the attacker needs to be arrested and held accountable. ธุรกรรมชุมชนของเรามีดีกว่านี้

Source Bangkok Post A transgender teenager beating up his transgender friend after they got into an argument over gossiping was caught on video and went viral on the internet on Thursday.

Reports said the video was recorded by one of their friends in a restroom in Sukhothai province on Wednesday.

In the clip, a transgender who called himself "P" was speaking angrily to his friend, "Jazz". P was angry that Jazz talked about him behind his back.

P continually taunted Jazz and challenged him to a fist fight but Jazz declined. P then slapped him in the face and later started kicking and knee throwing his friend who refused to retaliate even when he was down on the floor.

Most netizens on YouTube criticised the teenager who beat up his friend, saying he should not attack another person who refused to fight back.

"Look at how she [P] throws her knee, that puts Buakaw to shame," a YouTube user said, referring to a famous Muay Thai boxer.

Another netizen posted a message, saying a transgender should not hurt another transgender
Posted by planetransgender at 10:24 AM No comments: Links to this post