The Life and Tragic Death of Transman Robert Eads 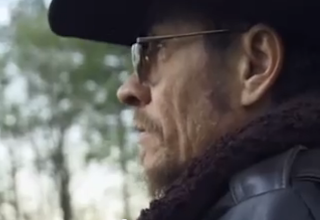 By the time Robert Eads found a doctor who would treat him it was too late His ovarian cancer has advanced too far.

Robert Eads ~ “I wish I could understand why they did what they did, why they had to feel that way… And I know in a way they’ve contributed to my dying here. But I can’t hate them. I don’t hate them. I feel sorry for them… What makes me most sad is they probably felt like they did the right thing,”

Southern Comfort is a 2001 documentary film about the final year in the life of Robert Eads, a female-to-male transsexual. Eads, diagnosed with ovarian cancer, was turned down for treatment by two dozen doctors out of fear that treating such a patient would hurt their reputations. By the time Eads received treatment, the cancer was too advanced to save his life. Wiki Southern Comfort

Read more about Robert Eads at the Journal of Global Health.


Posted by planetransgender at 10:43 PM No comments: Links to this post 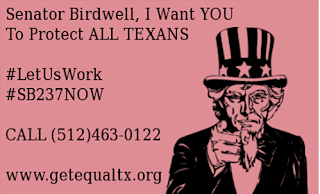 The Dallas Voice headline "GetEQUAL TX expects up to 20 arrests at action in support of state ENDA" got my attention.

Some one's actually contemplating civil disobedience in the Lone Star? Dangerous stuff. As a Soulforce member I will tell you from experience Texas police have been known to up the anty for civil disobedience here making normally nominal charges very expensive.

So whats it all about? What's the ruckus? The bill that would help us live our lives without the discrimination we face on a daily basis, SB237 is being held up in committee.

Michael GetEqual Diviesti, Texas state Lead for GetEqual explained why this is so important to him on facebook he would be willing to be arrested just to bring attention to it. It's a story nearly every LGBT Texan can relate to.

I was fired for being gay.

It's not a story that generally comes up in conversation and, I happen to have the sort of personality where, when I talk about something, I relive it. So I tend not to talk about it often but, I feel it is important to talk about because of what is going on right now in the legislature.

Many of you know that I served in the United States Army and made my way to Texas by way of Ft. Hood. Upon my discharge, I decided to move to Austin. My first job out of the military was working for the Austin State School working with residents that had many different mental disabilities. At the time, the campus was a state funded institution. After working there for the first year, I made the decision to try to go to college. The only issue was that I needed a steady schedule in order to do so, thus, I moved to a different department at the same campus. As usual, I received compliments for picking up the new job quickly and for going above and beyond to ensure that I was carrying out my duties.

Shortly after the switch, however, my relationship with my new boss drastically changed. The events that made that happen were disturbing. My roommate at the time, Jeff, had just received a promotion over my boss. The very next time she saw Jeff, she rushed towards him, slapped him in the face and said, "I can't stand you you little faggot". I was floored. Right in front of me and a few other witnesses, one of which was her boss, and not a single reprimand. She wasn't even sent home for the day to cool down.

For the next several days, I laid low, afraid that she might find out that I was gay and not knowing what she might do... A week went by and I no longer had to wonder. In conversation with friends of hers on campus, she found out that Jeff and I were roommates and inferred from that that I must be gay. She began jabbing me about it and even preaching to me. So a few days later, when she called me into her office, I felt like something was up so, I hit the memo button on my cell phone and recorded the conversation which was very short. "Get your stuff and leave. I can't have a fucking faggot working for me. You're fired".

I took this audio to my ombudsman who assured me that, while it was clear that I was fired for being gay, I had no legal recourse. This is the reason I've been fighting for an Employment Non-Discrimination Act (ENDA) and it's why it's so important that we pass anti-discrimination laws. It's not going to save everyone from living this tragic ordeal but, it can give us some legal leverage when we have the ability to prove that we were fired simply because of sexual orientation, gender identity, or gender expression.

It is why I think it is important that Texas pass Senate Bill 237 which would simply give the Texas Workforce Commission, the ability to flag and investigate workplace discrimination claims. It is why I need for my friends to help me make sure that this doesn't happen to others.

- You can sign the petition at the bottom of this page, urging senators to vote on, pass, and co-author the bill

- You can call each of those senators, once a day, or once a week, and ask them to support the bill (the numbers are provided in the page)

- you can use the "donate" button at the top right of the page to help us to continue to push for this important bill.


Posted by planetransgender at 10:55 AM No comments: Links to this post