Source albawaba.com: The Lebanese mayor of Dekwaneh defended his actions in an interview Tuesday after he ordered Lebanese security forces to raid and shut down a gay-friendly nightclub in the Beiruti suburb town.

Several club-goers were arrested and forced to undress in the municipal headquarters, where they were then photographed naked.
“I saw 25 men outside, or what looked like boys and men. I went inside... I saw people kissing, touching each other, and a man wearing a skirt. These homosexual acts that are happening... are scandalous sexual acts,” Antoine Shakhtoura said.

Those arrested included “people from the Syrian community and a Lebanese transsexual woman, who was harassed and forced to undress in the municipal headquarters,” said Maydaa.

“Of course we made them take off their clothes,” Shakhtoura said referring to the people they transferred to the municipality’s headquarters who were also photographed there.

“We saw a scandalous situation and we had to know what these people were. Is it a woman or a man? Turned out to be a half woman and half man. I do not accept this in Dekwaneh,” he insisted

Posted by planetransgender at 11:33 AM No comments: Links to this post 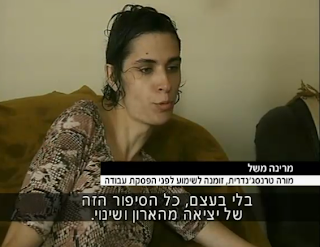 Marina told Channel 2 Israel: ‘I tried to explain that I am a human being just like they are and that it has no bearing on me being professional, and they need to accept people as they are’.


She tried to explain ongoing work with pupils includes small talk, and she refuses to hide her identity, ‘coming out should encourage teachers to come out to students to teachers so that neither teachers nor students feel ashamed of themselves’.

Attorney Moshe Shochetman, of the Aguda, Israel’s LGBT advocacy group, told Chanel 2 News: ‘Its very hard for this woman to find work, this is her bread and butter and she’s very good at it – she is outstanding and has received an award for her work.

Posted by planetransgender at 11:03 AM No comments: Links to this post