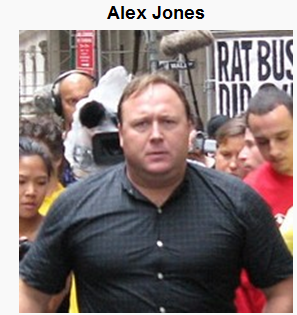 .;..because whatever they're injecting in there...

JONES: "They're saying in high schools, in junior highs now, they're going to have - men can decide to be in the women's bathroom if they want. You're like 'well big deal, that's their gender.'

It's all about these fake rights that don't exist versus my basic liberty being taken. It's not that I'm against people that think they're a woman or a man or whatever. I don't even care. Give me a break. It's not even on my radar screen. I could care less. I care about people."

"I dealt at Access TV with a famous Austin transvestite, who died a few years ago, who they're talking about building a statue to, going in the bathroom, men and women, and vomiting all over the walls when they would do whatever they were doing in there. I mean, I'm talking about several transvestites cramming their way into the men's bathroom, the women's bathroom. You'd go in there to comb your hair before you went on air, there they were. And they finally got thrown out of there because of it and said it was because of discrimination because they were transvestites. No. It was because whatever they were injecting in there made them throw up all over - I mean imagine every week throw up all over the walls." ~ Media Matters


So who is this asshat Alex Jones? I live in Texas and never heard of him.

"As of 2010, he was estimated to have an audience of over 2 million listeners, with a demographic heavier in younger viewers than other conservative pundits In 2011, he had a larger on-line audience than Glenn Beck and Rush Limbaugh combined." ~ Wiki


Posted by planetransgender at 10:31 PM No comments: Links to this post

Reading the Council report "Putting an end to coerced sterilisations and castrations" it becomes immediately clear, this is human rights tragedy that must stop now.

"Five groups of people have been particularly subject to coerced sterilisation and castration in the past: Roma women,10 convicted sex offenders, transgender persons and persons with disabilities (“eugenic” motives), and the marginalised, stigmatised, or considered unable to cope."

"There are very few sterilisations and practically no castrations in Council of Europe member states today and in the most recent past which can clearly be labelled as “forced”: most of these concern persons with disabilities. However, there is a small, but significant number of both sterilisations and castrations which would fall under the various definitions of “coerced”. These are mainly directed against transgender persons, Roma women and convicted sex offenders. Neither forced nor coerced sterilisations or castrations can be legitimated in any way in the 21st century – they must stop."

"In many European countries, either sterilisation or sex-reassignment surgery or both are a requirement for the country to legally recognise a transgender person in his or her new (authentic) gender. According to RSFL, the Swedish Federation for Lesbian, Gay, Bisexual and Transgender Rights, 29 out of the 47 Council of Europe member states have a sterilisation requirement. According to the UN Special Rapporteur on torture and other cruel, inhuman or degrading treatment or punishment, Mr Juan E. Méndez, in 11 states where there is no legislation regulating legal recognition of gender, enforced sterilization is still practised."

"We must put an end to coerced sterilisation and castration. Who can read Ms Gächter’s testimony (Click this link, it's at the bottom of the report) or the history of eugenic sterilisation all over Europe without feeling an overwhelming sentiment of “Never again!”? There is an urgent task for us as parliamentarians to revise our laws and review our state policies in order to build up clear safeguards against future abuses. We need to prevent coerced sterilisation and castration also by working for a change in mentalities: we need to fight stereotypes and prejudice against those who appear “different” and thus sometimes considered by the bigoted to be worth less, be they Roma women, sex offenders, transgender persons, persons with disabilities, or any other marginalised or stigmatised group. We must fight paternalistic attitudes in the medical profession, and raise awareness of coerced sterilisation and castration as a serious human rights violation which brings shame not on the victims, but on the perpetrators."

"We must ensure proper redress to victims of coerced sterilisation and castration, whoever they are, and whenever the abuses occurred. In recent cases, this includes the protection and rehabilitation of victims and the prosecution of offenders. But in all cases, as rare, individual or historic as they may be, official apologies and at least symbolic compensation must also be given. Only then will we have lived up fully to the ideals of the Council of Europe."

Posted by planetransgender at 11:23 AM No comments: Links to this post