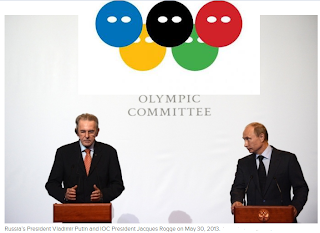 Will the world validate Putin's Amorality?

MOSCOW, July 26 (R-Sport)  - The International Olympic Committee told R-Sport on Friday it has received “assurances from the highest level” of Russian government that athletes and spectators at next year’s Winter Olympics in Sochi will be exempt from a controversial law banning anything deemed to promote homosexuality.
Since it was signed into law by President Vladimir Putin last month, the legislation targeting so-called homosexual propaganda has attracted calls from activists around the world to boycott Russia’s first Winter Olympics.
“As a sporting organization, what we can do is to continue to work to ensure that the Games can take place without discrimination against athletes, officials, spectators and the media,” the IOC said in an emailed statement.


“To that end, the IOC has received assurances from the highest level of government in Russia that the legislation will not affect those attending or taking part in the Games.”
The IOC added that “this legislation has just been passed into law and it remains to be seen whether and how it will be implemented, particularly as regards the Games in Sochi.”
The IOC has decided to ignore the brutal inhuman repression being carried out by Putin's henchmen and will try to forge ahead with the Olympics despite a worldwide cry to boycott it. Despite overwhelming evidence about the true nature of the "gay Propaganda law" available by a google search! That's not too surprising but then nether is the corporate response.

Buzfeed reports: "NBCUniversal, which has the exclusive U.S. rights to air the 2014 Winter Olympics in Sochi, responded to questions about their coverage plans in light of Russia’s anti-LGBT laws with a broad statement that the company “strongly supports equal rights.”

"The statement from NBCUniversal came hours after the International Olympic Committee announced that they had received assurances from Russian officials that the anti-LGBT laws there would not be enforced against athletes and attendees of the Sochi Olympics."
“NBCUniversal strongly supports equal rights and the fair treatment for all people. The spirit of the Olympic Games is about unifying people and countries through the celebration of sport and it is our hope that spirit will prevail,” NBCUniversal senior vice president of corporate communications Cameron Blanchard told BuzzFeed Friday evening."

NBCUniversal, the media center you will be using at the 2014 Olympics?

ifex.org reports that "Semyon Simonov, coordinator of Memorial's Migration and Law Network in Sochi, told Human Rights Watch that officials from the tax inspectorate, the Federal Security Service, and the prosecutor's office arrived at Memorial's office at 11 a.m. on July 23. The officials arrived approximately 90 minutes after Simonov had received a phone call from officials informing him that the inspection would take place. A statement published by Memorial said that the officials claimed there had been a complaint against the group but refused to provide any details. They asked to see all the documents relating to the office's work and read through several files on migrant worker cases that were in folders in plain sight. They did not try to search the organization's premises or gain access to their computers and did not remove any documents."
The officials called the landlord of the building where Memorial rents the office space and asked for a copy of the lease.
"On July 22 Simonov hand-delivered a two-page complaint to the Adler district prosecutor's office describing a range of alleged violations by the construction company. The alleged violations included confiscating migrant workers' identity documents – in some cases for three to four months at a time – failure to pay promised wages and to provide workers with copies of their contracts, and failure to provide sanitary living conditions."
"Among those affected by the alleged abuses are migrant workers who are building the Main Media Center for the Olympic Games."

Mr Putin, upon my arrival at the Moscow airport for the Olympics I will be kissing my girlfriend and while holding up signs denouncing your treatment of my community. Or will I get my head busted open because it's too far from Sochi? What exactly is the time frame of the suspension of your gay propaganda law? Two days before, a hour?  And how close do I have to get to Sochi to be assured that my most basic human rights are protected?

Cameron Blanchard at NBCUniversal, at what time does your self professed morality begin? Now with the construction of you're media center? Too late for that now but perhaps when the Olympics begin? How many kilometers from Sochi will your morality encompass? A kilometer for a day or so?

There's only one answer that's not immoral!


Boycott Putin’s Russian Winter Olympics #FreePussyRiot Balaclavas for everyone! No Pussies No Games is petitioning to the world's people not to participate. Not to validate.

Posted by planetransgender at 9:22 PM No comments: Links to this post 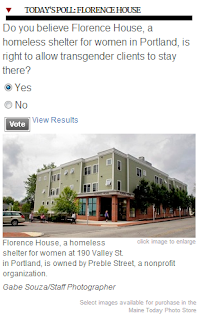 I'm destitute. Haven't had steady meals in months after losing my job and not one good night sleep after my landlord evicted me. Its getting unbearable outside. It's ether steaming hot or freezing cold in Portland Maine.

I have to get inside but there's only a few options for emergency housing and I want none of them.

See, I'm transgender, and haven't shaved in weeks and skirt is filthy. I got beat up a couple days ago and the last time I looked in the mirror I gasped. My eyes like the dead. I begun transitioning in 07 but some of us just never loose that stubble completely and my mannerisms? Damn, being on the street is all about survival. I know if I walk into the woman's shelter someones going to say something.

Oh, god they let me stay. They were so nice, just gave me a bed, but the other ladies just stare and whisper. If only I can tonight. I desperately need sleep. But this lady is standing at my bed twirling a cross. She'd not saying anything but a bunch of them just followed me into the bathroom. Talking loud. Outside my stall door. Someones banging on it now.

Oh fuck. They just called me into the front office. Now I'm hearing that that some of the residents said that I'm really a man. They told the office that because I had a 5 o'clock shadow, no make up and dirty clothes and a deeper voice they want me out of the shelter.

This is really happening at the Florance House:


"I am supposed to be there as a woman with other women," said one of the women, who did not want to be identified for fear of losing her spot at the shelter. She said one of the people in question has stared at her, making her uncomfortable.

But the women who complained said they believe that in at least one case, it was a ruse. They believe one of the people in question is a man who occasionally dresses as a woman to get into the shelter, perhaps for voyeuristic reasons. That person did not have any feminine mannerisms and often dresses in a T-shirt and jeans, sporting a 5 o'clock shadow of male facial hair, they said.

"If they're really living as a woman, I think they have every right to be there," said one of the women who complained. "But he wasn't wearing makeup or wearing eyeliner or anything. Just a man wearing a skirt. It was just odd."


Thank god that this shelter is a fully welcoming place so as of this post the transgender woman still have options.

But this could have been me. After losing my job after beginning transition and getting kicked out of my home I was saved by a transgender man who saw me at a weekly gender diversity meeting. He just asked me out of the blue "do you need a place to stay?" He allowed me the time to find another job. He saved me from having to go through this hell.

After getting my feet back on the ground I found I needed to pay it forward in 09. It was a arduous, tedious time consuming effort but we got the Dallas homeless shelter "The Bridge" to agree to admit transgender clients. They refused to attend even one meeting but the person who signed their checks from the city supported our efforts so we got a 'procedural update' from the shelter. I need to go back to The Bridge in my finest apparel and see if they still are abiding by it. (the  Dallas Transgender Advocates is no longer)


Posted by planetransgender at 11:28 AM No comments: Links to this post