Another turn around, yet another de facto acknowledgment by Russian officials regarding the immorality of the "Gay Propaganda Laws" 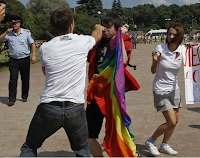 Originally, The Olympic committee (OIC) in a effort to stifle the worlds objection to sending there athletes in harms way at the 2014 Olympics claimed a unnamed Russian official  had given them assurances LGBT athletes would not be persecuted under the "Gay Propaganda Law". This was a optimal evasion by the OIC since it would have freed them of any moral obligation or claims of liability in the event the Russians didn't temporally suspend the law and beat people except.....

......that no sooner than that dog and pony show ended a cosponsor of the anti LGBT law, Vitaly Milonov, a Member of the Legislative Assembly of St. Petersburg, said "If a law has been approved by the federal legislature and signed by the president, then the government has no right to suspend it. It doesn't have the authority." So the hate fest was back on.... 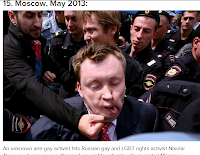 ....and if left at that Russia probably would have faced an all out boycott something they were not prepared to do. There is a lot of money to be made and prestige and ego to satisfy.
So today another in a series of  abrupt about faces, 100Wapi reports that "Russia said on Sunday that athletes and guests attending next year’s Winter Olympics will not be subject to the country’s stringent new anti-gay law." 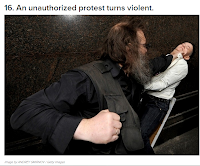 “The Olympic Games is a major international event. We need to be as polite and tolerant as possible. That is why a decision has been made not to raise this issue during the Olympics,” Igor Ananskikh, deputy chairman of the State Duma’s Physical Culture, Sport and Youth Policy Committee, told Interfax."

“Russia plans to host large international competitions in the future. The atmosphere at them must be as safe and polite as possible,” he added.

"His comments came just a day after Russia’s sports minister warned that athletes and spectators would be accountable under the law."


Dear Mr. Igor Ananskikh what of the mobs, the bullies the orthodox 'christian' criminals who always show up whenever one or more LGBT person gather to beat them up? YOUR country not only encourages this violence but turns a blind eye when it happens. Mr. Igor Ananskikh your country needs to change those laws and start enforcing laws that protect all tour citizens now.

Russian officials assurances may seem creditable enough to allow corporations, the IOC and politicians to ignore the  brutal treatment of intellectuals, LGBT and opposition parties which will undoubtedly resume immediately following the "international competitions". So Putin will have his games.

EXCEPT Putin has not taken into account the worlds population which can see through his facade, his pretensions and faux humanity. That is why transaction Convergence sponsored the petition No Pussies No Games: Boycott / Demonstrate at The Russian Winter Olympics. 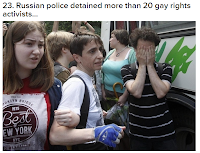 We're not petitioning politicians, corporations or the IOC. Its understood who they are, they don't care.

This is the voice of the people who you beat.

The voice of the people you brutally oppress.

This is the voice of the people calling out to one another to make a moral commitment to force Putin to lead Russia away from the path he has put her on. This will work regardless if athletes and attendees decide to boycott or demonstrate at Sochi because the reality is that many athletes and guests feel that there attendance is a more valuable form dissension.

And with this temporary suspension of a legally enacted Russian law by a bureaucrat for the temporary safety of LGBT visitors and artists, Putin has ONCE again shown how righteous any protest might be.

Balaclavas for everyone. Free Pussy Riot

Posted by planetransgender at 9:25 PM No comments:

Sarah Baker's unofficial guide to transitioning for Life while in prison

By now everyone has read the sensationalistic mail online article "Violent inmate who tortured his step-mother's brother then boasted about freebies in prison is given £10,000 sex change on the NHS" about Sarah Baker, a transgender prisoner serving life for resisting a child rapist who was preying on her behind bars.

In all fairness the article does make a effort to properly inform but not before repeatably misgendering her despite acknowledging her desire to be called Sarah, positioning her medically mandated surgery as a frivolous unwarranted expense and calling her a "Violent violin playing thug". All of which has garnered Mail on line hundreds of shares comments as of this posting.

Can you say pandering to violence prone right wing thugs?

So lets for the sake of it, take a less condemning look at Sarah. She was originally jailed at age 19 after spending her youth incarcerated in juvenile detention centers. It's not all Rosy. She escaped open prison in 2007, spent 100 days on the lamb and fathered a child with a former pen pal during that time.

The daily mail makes a point to mention Baker said prison was agreeable to her in a 2009 Telegraph article. This sort of bravado in the face of seemingly insurmountable adversity is the same thing that I, like many other trans people displayed when we used hyper masculinity to mask our true selves while serving in the military.

For a inside look I read another article about Sarah's current Pen pal. It was published today sans the sensationalistic headlines and unsurprisingly has receive few shares or comments as of this posting.

"Mrs Stockwell, 74, started writing to Baker when she was volunteering with probation more than 20 years ago and now feels like she is "a second son". She feels that she is a new person and deserves chance." Mrs Stockwell helped Sarah publish her first book and is helping with the next one and feels she is a changed person who deserves a chance.

So who is Sarah, a undeserving inhuman thug as the Mail online would have us to believe?  This Is Croydon today.co.uk shows us her human side in a interview let her speak about the conditions she is facing now:

Social skills are not taught. If you're chucked out at 40 with barely anything in your pocket, how are you going to survive?
"The thought of being released terrifies me and I would find it easier to be left here.
"At least we know what to expect here – what will I do, die alone in a bedsit?
"However, 25 years is enough. I have hurt people but I want to do something positive."

The violin player added: "The London Chamber Orchestra have said I can work for them if I am released."
Her next opportunity to appear before a panel will be in October this year

Posted by planetransgender at 2:05 PM No comments: