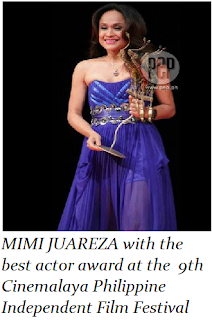 True to its maverick spirit, the 9th Cinemalaya Philippine Independent Film Festival gave the best actor trophy to a transgender, Mimi Juareza, for his acting debut in Eduardo Roy Jr.’s “Quick Change.”
Asked if he had wanted to win best actress instead, Juareza told the Inquirer: “Best actor, best actress … whatever, for as long as they show their appreciation for my work, I don’t mind.” The jury cited Juarez for “his bold take on a gender-bending role.”
Roy said that for a first-timer, Juareza was a “natural.”“Luckily, he was a good actor to begin with. We only had a two-day workshop before the shoot,” Roy told the Inquirer.

The 9th Cinemalaya Film Festival Awards Night was held at the Cultural Center of the Philippines (CCP) on August 4, 2013.

SYNOPSIS: Dorina believes she is a lady incarcerated inside a male body. She's got herself a flourishing career, albeit in an illegal cosmetic surgery business. She is a mother figure to Hero. She acts as a devoted wife to Uno, Dorina feels that she is one lucky woman. Until his partner falls in love with another transgender.

Eduardo Roy Jr.’s “Quick Change” is one my favorite films in the festival.  The story is not an easy sell and moviegoers with an open mind may be the only ones to give this opus a second look.  Nevertheless, “Quick Change” is one of the must-see movies of the year. Many films have already tackled stories about transsexual individuals, but some films were more exploitative than revelatory. Roy’s “Quick Change” rises above the rest.  The movie tells the story of Dorina, a middle-aged transsexual living with a younger man and raising his young nephew.
What separates “Quick Change” from most gay-themed films is that it is not really about being a homosexual.  It is about living.  Dorina is flesh and blood.  He or she (whatever pronoun you may assign to Dorina) is a three-dimensional character solving personal and economic problems like most Filipinos.  Her conditions may be unique but the pain and complications in her life are not alien to most.  Dorina may not necessarily be the poster girl for the LGBT community but director Roy brings justice to Dorina’s humanity by making her a complex individual rather than a prototype.  Dorina, as a film protagonist, does more service to the community than non-threatening gay characters on television. In a way, by being flesh and blood, Dorina indirectly criticizes the community and the public at large.  You cannot really shove her in a convenient box with a label “immoral faggot.”
Read more at Braun Philippines online

Posted by planetransgender at 10:38 PM No comments: