LGBTQI athletes and people of moral conscious, you have been deceived and lied to by the IOC, major media outlets and Russian authorities in a scheme to get you to go to the Russian winter games. The IOC's mission is to get you to Sochi so that you spend every iota of your being and dollars in your righteous endeavour to bring home a medal, glory and fame for your country and corporate sponsors.

In an August interview with RU Sport  (Putin's sports propaganda outlet), the CEO of the US Olympic Committee, Scott Blackmun, answered RU sports questions (as if they didn't already know):

What's your interpretation of Russia's anti-gay law and are there any measures you're planning on taking ahead of the Sochi 2014 Olympics?
"We've read the law, there are over 200 national Olympic committees, and it's not workable for each of them to develop its own interpretation and approach with respect to the law, so were looking to the IOC for some leadership in this issue. they have been in discussions with the Russian authorities, so we're awaiting for some clarification from them."

Asked if he felt responsible if American athletes were beaten or jailed for being LGBT Blackmun told RU Sports "we're not going to get involved" explaining that athletes need to obey the laws of the host countries and the "Gay Propaganda" law was "no different" from laws in other countries.

You might have to get involved if an athlete decides to make a protest.
"You can't judge in advance what you're going to do. Each Games is different. The athletes are always going into countries with laws different than his or her own country. They're going to agree with those laws in some ways, they're going to disagree with those laws in other ways. It's our strong desire that our athletes comply with the laws of every nation that we visit. This law is no different."

"Our job, first and foremost, is to make sure that our athletes are prepared to compete and aren't distracted while they're here. We're a sports organization, and we'll leave the diplomacy on the legal issues to the diplomats, and we're not going to get involved." 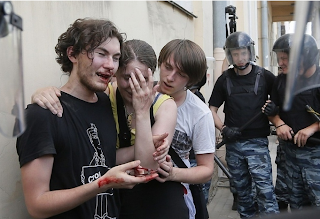 Mr Blackmun would you be so indifferent if this was you're family member.
Mr. Blackmun this is my Russian LGBT family. This was done by Putin's police the same goons who will be at Sochi.
If Mr. Blackmun has his way 'gay propaganda' laws will become commonplace. oOher countries are watching the worlds reaction carefully as they too would love to legitimize beating and imprisoning of there LGBT citizens as Russia has done.

After all that the IOC has done to muddy the waters  the simple act of painting one's fingernails the rainbow was considered promoting LGBT rights at the Moscow summer games.

There have been many mainstream article quoting athletes saying they would compete in Sochi but what of the common Russian? English speaking LGBT Russian are asking for a boycott! Boycott/protest at the Russian Winter Olympics
Posted by planetransgender at 7:11 PM No comments: Links to this post