For the kids: LGBT United we stand against NOM's AB 1266 referendum campaign 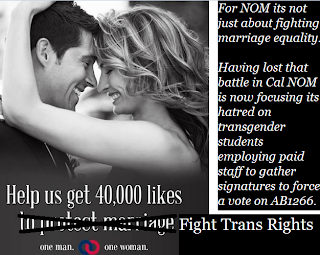 HRC Exposes this hate group: "NOM is trying to connect it back to Prop 8 because they want you to think that this is well within its stated cause of "protecting marriage."  But it isn't.  This new law has absolutely nothing to do with marriage—zero. zilch. nada.—and everything to do with making the school day safer for one of the nation's most vulnerable populations of young people.  NOM's choice to endorse this wholly unrelated measure is just further proof that NOM's agenda is an anti-LGBT one that never had any intention on stopping at our marriage rights.

Of course it's not a big surprise to see NOM making this choice, considering that NOM's own political director, Frank Schubert, is the campaign manager for this repeal effort.  In that regard, there is, in fact, a marriage connection: Schubert, who lost all four marriage fights in November 2012, is running out of marriage campaigns off which to collect his millions, thus the need for new endeavors.  Since he and they are running out of loving couples to force to pause their lives, Schubert and NOM are just moving their muscle over to the awesome little kids who simply want to live truthfully and learn safely."
HRC reports that NOM wouldn't even exist if not for the 10 top donors who contributed $8,326,000 or 90.5% of its declared revenue in 2010.

NOM's signature gatherers won't mention that there has never been a lawsuit brought against a transgender student alleging any improprieties in public accommodations but they will parrot this paragraph from NOM's website, They hope to instill a sense of dread in the uninformed and pander to bigots:


"Not even two short months after the US Supreme Court refused to uphold the right of over 7 million Californians to define marriage as the union of one man and one woman, the California Legislature passed AB 1266, the school co-ed bathroom law," said Brown. "They are forcing our school children to be exposed in showers and bathrooms to members of the opposite sex who claim a 'gender identity' with that sex."

If anything NOM's latest hate campaign should unite our community as never before. For the kids.

Posted by planetransgender at 7:12 PM No comments: 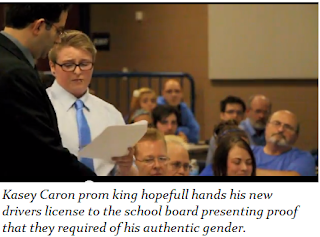 After being invited by a school councilor to run for homecoming king transgender student Kasey Caron was devastated after being told by the school Principal he had to run for prom queen or withdraw his name. Kasey was told the reason being was that his drivers license incorrectly indicated his gender as female.

Even more disempowering was the school board meeting he attended were he displayed his new driver license with the gender marker correctly indicating male, confidently expecting to be allowed to run for prom king. Kasey eloquently and succinctly stated his case, only to be misgendered and humiliated by the schools attorney. He told him Pennsylvania law requires him to present a birth certificate aligned his gender expression which requires body modification and sterilization before Kasey would be allowed to run for prom king.

In his words on XoJane: "The first person, and really the only person on the board to speak was the solicitor Timothy Leventry. He basically said that regardless of my license, regardless of my gender expression and identity, I was a girl and I was going to be treated as such. He said that because I have “female genitalia, things of this nature,” then I am legally female.

My question is: Since when did my genitalia come into conversation? In a public meeting, too!

Did they question the other court members about their genitals?"

Even after being corrected, Leventry also continued to constantly use the incorrect pronouns to refer to me. I had never felt so disrespected, so singled out and so humiliated in my life.


Kasey isn't giving up. If this isn't resolved before the next school board meeting he will be registering to speak. You have our support Kasey. Remember, you are a pioneer in the Keystone and as such the way may be very difficult.


Posted by planetransgender at 8:18 AM No comments: 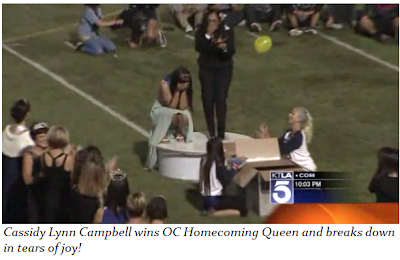 It was amazing enough for Cassidy when she learned she was among the top ten contenders for homecoming queen so when she won it, was almost to much.

The enormity of her victory is in sharp contrast to the struggles Pennsylvania trans students still have just getting their authentic gender identity recognized by their schools.

“And then I realized it wasn’t for me anymore and I was doing this for so many people all around the county and the state and possibly the world and I am so proud to win this not just for me, but everyone out there,” Campbell said.

The 16-year-old did face some negativity over her nomination from fellow students, but she and Principal Paul Morrow are proud of the way the majority voted.

“Were proud of the message from home of the Vikings has been one of equity, acceptance, tolerance and respect,” Principal Morrow said.


We are proud of Cassidy and you Principal Morrow.

Posted by planetransgender at 6:07 AM No comments: