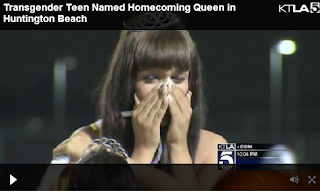 Last Friday night Cassidy Lynn Campbell won the OC Homecoming Queen broke and broke down in tears of joy.  It was a wonderful moment in this teenagers short life, in her experience the most important thing that could happen to her.

I and many others celebrated her victory but were horrified as shortly afterwards her tears of joy turned into tears of agony.

Who would do this to her?

Cassidy Lynn had read the comments about her winning. There were many who attacked her, belittled her experience, called her a boy and did everything else they could think of to make her feel bad, just like Gullasmag did on GenderTrender.

Comments on "Gendertrender regarding Cassidy's pain... 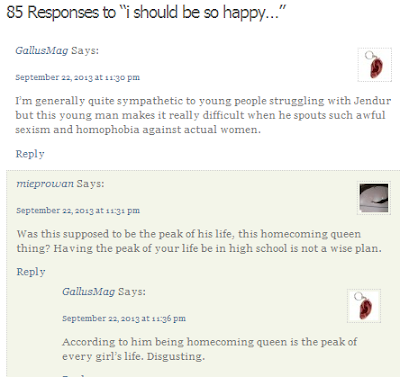 As if we needed more proof that TERF are scum. Gendertrender has intentional tailored there SEO so when people google planetransgender they also see gullasmag. What if this young girl commits suicide gullusmag? Here's the proof for the attorneys if they need it. You and your crew belittled her, intimidated her and intentionally caused her pain. I hope her family sues you for every penny you have. I hope they investigate who made those terrible comments on her video. I would put money on it a TERF made at least some of those awful comments.


Posted by planetransgender at 10:09 PM No comments: Links to this post