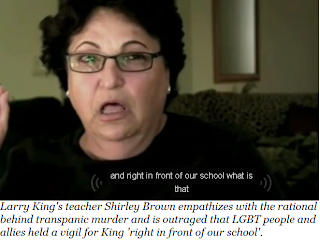 Oxnard California junior high school teacher Shirley Brown said she understands how the boy who murdered Larry king felt after being given a Valentine card by King. “I relate to Brandon because I could see my own self being in that very same position.

In fact, she thinks Larry's murder was comical, perhaps poetic justice explaining how she would have reacted:. “I don’t know if I would have taken a gun, but a good swift kick in the butt might work really well,’ she added, laughing.

Completely irate about the LGBT pride parade that followed in Oxnard she asks "Who would do such a thing? Who would do that?" She needs to ask that question to the man in the center of his apostles in the picture on her wall. His answer has been there for the taking all along.

Is this person still teaching? Is she still enabling transphobia and homophobia in public schools?

Posted by planetransgender at 8:42 PM No comments: Links to this post 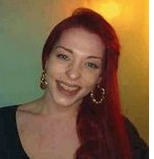 Source Huffington Post: A man stabbed a transgender woman to death in her bedroom before leaving her decomposing body undiscovered for more than a month, a court has heard. Romy Maynard, 28, is on trial accused of killing 22-year-old Chrissie Azzopardi at her home in Crescent Way, north London, in April last year.

Azzopardi, who was due to undergo gender surgery later that year, was found lying on her bed with fatal stab wounds after neighbours noticed a bad smell coming from her flat and raised the alarm in June 2012, the Old Bailey heard. Opening the prosecution's case, Mark Heywood QC said the victim had been stabbed in the chest, pushed down and then stabbed again with force which had pierced her heart.

"The killing was swift and brutal," the barrister said. "It is likely she fought back but was very quickly overwhelmed. The killer then left her while she lay on the bed, dead or dying. In all probability she knew her killer and she allowed him there. He covered her face with one of the pillows from the bed, either to finish his work or perhaps to avoid her stare in death. The crown says this killing is the work of the defendant. He says he is not the killer and so that it must be someone else."

Romy Maynard lived just down the road from Chrissie Azzopardi with his wife and children. It is said that there were multiple phone conversations prior to her murder.


Posted by planetransgender at 7:33 AM No comments: Links to this post