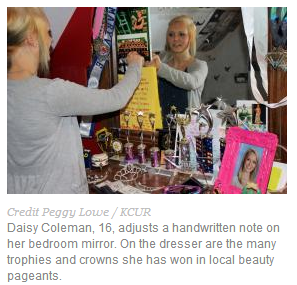 Raped by small town high school football players Daisy was dumped drunk on her front yard on a 20 degree night to die, the two perps confessed with video evidence. You would think this would be a open and shut case.

But charges were dropped and the court case sealed. Then after enduring the hate of the small town the family puts there house up for sale only to have it burned to the ground.


Lieutenant Governor Peter Kinder today released the following statement urging Missouri Attorney General Chris Koster and the Nodaway County Prosecuting Attorney Robert Rice revisit a controversial alleged rape case in Nodaway County.
“Since Sunday I have read with growing dismay the media accounts of the Daisy Coleman case in Nodaway County. I make no claim to knowledge of all the facts. Still, facts revealed in exhaustive media reports, including the 4,000-word piece in the Kansas City Star, raise all kinds of questions that it is now clear won’t be put to rest. These questions will fester and taint the reputation of our state for delivering impartial justice to all.
“I am disappointed that the Attorney General would wash his hands of the matter through a brief statement by a spokesman. The appalling facts in the public record shock the conscience and cry out that responsible authorities must take another look. I call on Attorney General Koster and Prosecutor Rice to join me in asking that the Circuit Court convene a grand jury to review all the evidence, hear all witnesses, and issue a decision as to whether charges should ensue.
“I hope that responsible officials will join me in this call for a grand jury to make the final call on whether criminal charges should or should not be filed.”

Everyone save a few media outlets have forgotten the events of this year except one.

What can you do?
Courtney Cole the Executive Director at Greater Kansas City Women's Political Caucus, Executive Director at MO Senate Democratic Campaign Committee and Owner and Manager at MO-Political is coordinating a protest on Tuesday, October 22, 2013, at 10:00am they will meet at the Nodaway County Courthouse in Maryville, Missouri. Details can be found on facebook here.

Ms Cole also asks that we "put pressure on Prosecuting Attorney Robert Rice who is responsible for closing the case without it being heard. Contact his office at (660) 582-8285 and ask for the case to be reopened or for Rice to turn it over to the Attorney General's office. You may also email Rice at prosatty@embarqmail.com You may also send daisies to the courthouse at 305 N. Main, Maryville 64468. Hold Rice accountable for the decision he made that has created a true injustice."

Two young girls have been raped in the town of Maryville, Missouri. Another high school football star, the grandson of a Missouri state official, has walked free. The people of Maryville turned their backs on these victims and one family has been forced to flee the town. After they left, their house was burned to the ground. On January 8th, a 14-year-old girl named Daisy and her 13-year-old friend were both raped in Maryville. Evidence of this assault was captured on film. Daisy's unconscious body was later dumped into her family's yard, left alone for hours in freezing weather. One of Daisy's attackers was initially in police custody, where he admitted to having sex with her while she was under the influence. He claimed it was consensual. The hospital states the young girl's blood alcohol level was almost twice the legal limit and they discovered three tears inside of her body, 2-4 inches in length. This suspect rapist is Matthew Barnett, a student at the University of Central Missouri. He's the grandson of Missouri state Representative, Rex Barnett. We demand an immediate investigation into the handling by local authorities of Daisy's case. Why were the suspects initially arrested and then released? How was video and medical evidence not enough to put one of these football players inside a court room? What is the connection of these prosecutors, if any, to Rep. Rex Barnett? Most of all, We are wondering, how do the residents of Maryville sleep at night? We have heard Daisy's story far too often. We heard it from Steubenville, Halifax and Uttar Pradesh. In some cases, action meant nothing because it couldn't bring them back. Both Amanda Todd and Rehtaeh Parsons, girls not much older than Daisy, took their own lives after the adults, the police and the school system, failed to protect them. If Maryville won't defend these young girls, if the police are to cowardly or corrupt to do their jobs, if justice system has abandoned them, then someone else will have to stand for them. Mayor Jim Fall, your hands are dirty. Maryville, expect us. We Are Anonymous. We Are Legion. We do not forgive. We do not forget. Join us. Press: Nightmare in Maryville (via @duganarnett at @KCStar) http://www.kansascity.com/2013/10/12/... Timeline of the Maryville Rape: (Peggy Lowe at @kcur) http://kcur.org/post/sexual-assault-m...

Sexual Assault In Maryville: A Timeline

1 a.m. — Daisy Coleman, 14, and a 13-year-old girlfriend sneak out of the Coleman’s home after texting with Matthew Barnett, 17. They go through a basement window at the Barnett home and begin drinking out of what is referred to as the “bitch cup.” Including Barnett, present were Nick Groumoutis, Cole Forney, Jordan Zech and a minor boy.
2 a.m. – Daisy Coleman and her friend are returned to the Coleman home, the younger girl told by the boys to go in and let Daisy stay outside and “vomit.” Daisy is propped up beside the house.
5 a.m. – Daisy Coleman discovered on the front porch of the family home.  She’s wearing sweatpants and a T-shirt, her hair wet and frozen. Her shoes, purse and cell phone are later  found by a Nodaway County sheriff’s investigator in the yard. The temperature was 30 degrees.
6:05 a.m.  — Deputy Ian Myers sent to Coleman home on sexual assault complaint. He finds Daisy Coleman incoherent and discovered five plastic bottles that had contained alcohol. Myers also takes as evidence Daisy’s clothes and cell phone. Texts from Matt Barnett are found on Daisy’s phone.  Daisy is taken to St. Francis Hospital. While there, Melinda Coleman tells Myers that Daisy’s friend was also assaulted. She is taken to the hospital, too.
9 a.m. – Among other injuries, Daisy Coleman’s rape exam shows three tears, 2-4 inches in length, which is positive for rape. Her blood alcohol is .14. (.08-.10 blood alcohol level is considered legally drunk.)
7:50 a.m. – Melinda and Daisy Coleman are interviewed at the hospital by Sheriff’s Capt. David Glidden.
9:30 a.m. – The minor girl’s mother is interviewed at the hospital by Glidden. The underage boy, who admits to having sex with the girl, was taken into custody at his home and later taken to the Juvenile Detention Center in St. Joseph, Mo.
10:25 a.m. – Sheriff’s investigators take photos of vomit in the grass outside Coleman home.
11 a.m. – Barnett is interviewed by Glidden at the sheriff’s office. He admitted he knew Daisy had been drinking before he had sex with her, but that she was only “buzzed” at the time and later drank more. He said he used a condom, which he later threw out of his car window as he was taking the girls home. Daisy was crying on the ride home, Barnett said. Barnett’s cell phone is seized. Groumoutis and Forney are taken to the sheriff’s office for interviews. Zech refuses to make a statement.
1:25 p.m. – A search warrant is served at the Barnett home and evidence (bedsheet and blanket, Gatorade bottles, a bottle of Bacardi “Big Apple,” panties, boxers and red plastic cup) was taken.
2:10 p.m. — Groumoutis is interviewed by Glidden. He said his iPhone was used by Zech to video Barnett and Daisy Coleman. The video was 5-10 seconds long and he had already deleted it from his phone, Groumoutis said. The phone is seized.
January 9, 2012
11:15 a.m. — Warrant for arrest of Barnett is served while he was in custody at the Nodaway County Jail.
11:30 a.m. — Trevor Schafer, a friend of Barnett, is interviewed by Glidden. Barnett called him to ask to drive Daisy Coleman and her friend home, he said. Schafer said he drove Barnett, the girls, and the minor boy back to the Coleman’s home. He said Daisy was crying and seemed drunk. Once the girls were dropped off, the minor boy and Barnett had a conversation about how Charlie Coleman, Daisy’s older brother, would “kill them for having sex,” then talked about telling Charlie they found Daisy drunk at a party and dropped her off at home, Schafer said.
January 13, 2012
10:20 a.m. — Zech is questioned at the sheriff’s office by Glidden, at first exercising his right to remain silent. He then decides to talk and admits that he used Groumoutis’ phone to take the video of Daisy Coleman and Barnett, though he said he didn’t think they were having sex. He said Groumoutis then deleted the video. He was arrested while in custody.
February 16, 2012
12 p.m. – Zech is interviewed by Glidden, with his attorney present. He said Daisy Coleman and Barnett went into the bedroom twice and that she drank several-- five to 10 shots of vodka. He admitted to videotaping the two kissing, naked from the waist down. Zech said he didn’t notice if Daisy Coleman was crying, but that she was very drunk and could not walk.
March 13, 2012
Sexual assault charge against Barnett is dropped. Sexual exploitation charge against Zech is dropped.
Sources: Nodaway County Sheriff’s Office; Nodaway County Circuit Court; Nodaway County Prosecuting Attorney Robert Rice; Coleman family; St. Joseph News-Press.
Posted by planetransgender at 9:57 AM No comments: Links to this post