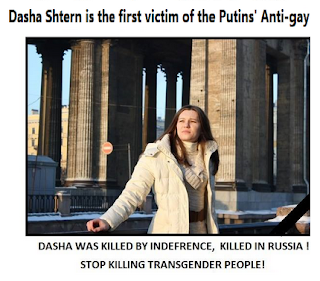 A small crowd gathered in Red Square October 19th to hold a vigil for 22 year old Dasha Shtern the first known suicide of a LGBT person that can be directly attributed to Vladimir Putin's anti LGBT laws.
Cross posted from guseinova's blog found at the Association of Russian Lawyers for human rights:
"The action was held on Red Square in Moscow 19 October 2013: the activists gathered on the square in memory of transgender girl Dasha Shtern, who had committed suicide in Ekaterinburg." on photo: Masha Bast near Kremlin, 19 Octoder 2013, Day of Remembrance: Dasha Shtern
The organizers said, that originally the event was planned outside the building of the Plenipotentiary representative of the Sverdlovsk region in Moscow, but the character and scale of the tragedy led them to the walls of the Kremlin. The activists lit the candles and laid the  flowers to the portrait of Dasha Stern near Kremlin. As top-lawyer and human rights defender Masha Bast said , Dasha Stern is the first victim of Vladimir Putin’s “Anti-gay Law”: as Dasha Shtern’s friends reported, she lost work as a municipal employee after signing of the law, she lost the opportunity to repay the hypothecation, the relatives abandoned her. Remind, October 19 - International Day for TG depathologization, this day there are public events, calling exclude the category "gender dysphoria" and "gender identity disorder" of new versions of diagnostic and statistical manual of the American Psychiatric Association , the International Classification of Diseases, WHO, from national statistical classification and medical guidelines.
www.rusadvocat.com

Posted by planetransgender at 9:47 PM No comments: Links to this post 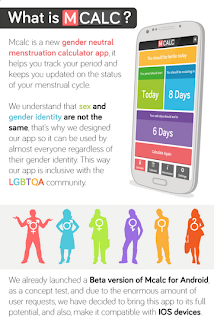 Sex Mind a group that describes itself as a interface between humanity and medical professionals is on Indigo seeking crowd funding for the development of a menstrual cycle app for mobile devices.

Why? With the advent of dads having children why shouldn't we have apps that treat us respectfully?

From the Indego site:

"There is a large amount of people in the world who do not identify with the traditional conception of gender, or who don´t express their gender in the same way as others. A gender neutral app like Mcalc is the perfect alternative for people who menstruate and have a hard time using overly feminized apps, or simply, for people who don´t want their tracking app to assume their gender and their sexual orientation. Aside from that, Mcalc helps to promote the inclusion of the LGBTQA community in the app market , joining plenty of other apps that have been supportive from the start."

Sex Mind has already released a beta version for Android. What bothered me was that I couldn't find a link to that app on their Tmblr or any other sites run by Sexmind. I found it by googling Sexmind  and down loaded the app to my Android.

The App worked the first I used it but then it quit accepting input. Even if it is in Beta thats not too impressive but then nether are the reviews.

Being a trans woman I have never had period but one of my partners did make timing hers my business. And I think its a great idea from my experiences presenting as male. I don't think there are too many manly trans men who would appreciate the flowery designs or being misgendered on the other apps I downloaded.

Its defiantly a idea who's time is due. (pun intended). Maybe the funding will help them have the resources to work the bugs out.

Posted by planetransgender at 10:23 AM 2 comments: Links to this post