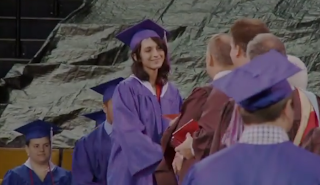 Source Newsday.com: Michael Clark, a freshman with The Film School at Santa Fe University of Art and Design (SFUAD), was recently awarded “Best Documentary” at the inaugural All-American High School Film Festival in New York City, where he also received nominations for Best Director and Best Overall Picture. Clark’s short film Losing Luke is about a transgender girl named Katie (previously known as “Luke”) and her experiences in an Oklahoma high school

Clark’s film was the only full-length student film to screen during the festival’s opening night. Tom Oliva, the festival’s executive director, said organizers wanted to give the 1,500 attendees a taste of the quality of films that would be screened that weekend.

“In the middle of the Bible Belt, many are raised to look down on transgender people,” he said. “With this film, I wanted to help stomp out this ignorance in the community by sharing her story and humanizing her.”

Read more at News Day
Posted by planetransgender at 7:28 AM No comments: Links to this post