Source NCTE "On November 12, 2013, the National Center for Transgender Equality honored Melissa Harris-Perry with the Media Momentum Award in recognition of her show's groundbreaking work covering transgender issues and including transgender voices. Though she could not be there to accept the award in person, she shared this video with NCTE to express her gratitude. Watch what she has to say about getting our stories right."

Posted by planetransgender at 7:31 PM No comments: Links to this post

Call me Stephen! Meet the high school coach who just came out as transgender 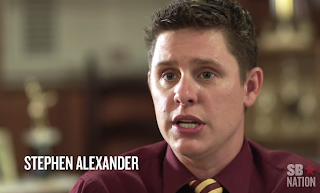 Stephen Alexander is amazing. Born into the wrong body Stephen grew up in a small Conservative Rhode Island town denying his true gender. It wasn't just scary he told Out Sports the prospect of telling his family terrified him.

So he moved to New York city and spent some time learning about himself without constraints and came home one day and declared he wanted his family to call him Stephen. A truly wonderful story of fulfillment and acceptance.

Posted by planetransgender at 6:00 PM No comments: Links to this post 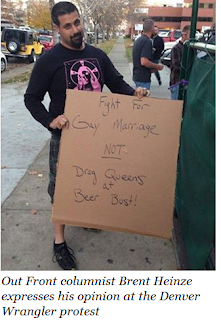 A very diverse group of LGBT people and allies met Sunday afternoon in front of a bear gay bar called "The Denver Wrangler" to bring attention to their denying entrance to Vito John Marzano, a regular patron who happened to be in drag that day after performing at a nearby fundraiser.

The bar contends they denied him entrance because his ID did not match him visually while simultaneously telling him he wasn't transgender de facto acknowledging that his ID matched.

The law ( para 47-912) requires places that offer alcoholic beverages to insure patrons are of legal age which was accomplished when the staff recognized Vito after he took off his wig. Vito's video of the encounter shows that the management denied him access to public accommodations because of his gender expression in violation of Colorado civil rights law.


Update: Gay media responds in force. List of article published by gay bloggers since this was posted at the bottom of the page.

I asked feminist Yvonne Wright why she was protesting she told me  "What disturbs me the most about this is the opposition from people within our community. If we don't stand together as a community - GLBT - we will never get anywhere. To hear gay men say things like "let them go to their own bars," is reminiscent of the times whites said let black go to their own bars. It is one thing to cater to a specific clientele. It is another to deny entrance or service because you are not a member of that clientele. When you are a public establishment, in Colorado you are required by law to treat everyone the same regardless of race, religion, sex, gender identification or sexual orientation."

More about the sign that shouts transmisogyny over gay media's silence, after the video.

Video was filmed entirely on a public sidewalk using a large cumbersome camera in plain view of all present, ergo no subjective nor reasonable expectation of privacy existed. Daniel S Gonzales holds the exclusive copyright to all video footage taken at the protest used in this film.

For more information on the boycott Denver-wrangler.com

I just e-mailed this to "Out Front."

"One of your regular columnists, Brent Heinze, is outside The Denver Wrangler during tonight's protest with a sign that says "support gay marriage, not drag queens at beer busts." I am just curious if you are covering this event and, if so, if you have seen this. I cannot understand why Denver's leading publication for GLBT issues would allow such a man to be a contributing columnist. It is also my sincere hope, as a legitimate journalist myself, that you are covering this protest. I am an Emmy award winning journalist who has covered stories through-out the world, has worked as both a reporter and an editor, and can say with confidence that this is a significant news event in our community. It has become loud and divisive. The whole issue of gender identity when being used to ID someone at a bar and excluding them and/or women from beer busts is one worth examining (especially since it is illegal and violates the very anti-discrimination codes intended to protect us - an oppressed minority). I realize a lot of people support The Denver Wrangler. I realize the bar contributes to a lot of events in our community. But, I hope you ARE a legitimate source of news and information for our community and, therefore, willing to cover sensitive issues that effect us all. Even more, I hope that you do not allow this man who is publicly spewing hate and discrimination to continue to be a part of your publication."

"I want to express my sincere apology to those who I hurt through my statement during the Wrangler protest on Sunday. By no means was my sign that read, “fight for gay marriage not drag queens at beer bust,” meant to show aggression, intolerance, or non-acceptance to anyone that expresses themselves how they want. It was intended to express my perspective about the fact that some in our community focus on being extremely negative and their energies could also be put towards larger inequities locally. Again, it was not meant to be construed to be hateful towards people expressing individualized gender expression or that they deserve to be discriminated against. I apologize for this having those undercurrents.

I’m trying to work with a few people to see what can be done in the future to have more conversations and see where it goes. I appreciate those who have taken the time to talk and email me about their concerns and frustrations instead of just throwing me under the bus or writing me off. I’m hopeful that through this combative situation some good can come out of this. I’m looking optimistically towards the future."

It clearly frames the issue as nothing else could have. As the video shows, people who were protesting were thoughtful, positive and sensitive. People who belong to the boycott page who were at the protest said were very encouraged by the reactions of Wranglers patrons with whom they interacted with.

The Protest page is and open group so anyone can post. One gay man in a thread since removed by the page admin called us "Twats" and told us to STFU. That sort of behaviour was seen time and again on other threads removed by the group admin.

Objecting to discrimination isn't "slanderous". The Wrangler is touting this letter by local group after members said they went "incognito' to the beer bust and found no discrimination.


In fact the only ones being intolerant is the Denver Wrangler staff. They have tried there best to silence the transgender media with intimidation and even threatened Vito with a lawsuit.


Another fact.  The Denver Wrangler has been very intent on cleansing the Internet of evidence, first getting favebook to censor articles about the incident, getting you tube to violate the video and by pressuring myself and the TransAdvocate to take our posts down.
I wanted a cisgender feminist perspective about the Brent Heinze appology so I asked Ms. Wright to comment on it:


His apology was not an apology. Instead of saying "I'm sorry for what I did," he said "I'm sorry if I hurt anyone because of what I did." This is what Heinze said in his apology about the sign, "It was intended to express my perspective about the fact that some in our community focus on being extremely negative and their energies could also be put towards larger inequities locally." This basically reiterated what he said the night before. So what if there are "bigger issues" in his mind. Who decides what is big and what is small? If you're gay and you want to marry, Equal Marriage is a big issue. If you're trans and you are turned down entrance to a bar and embarrassed in front of your friends, that's a big issue. One case doesn't detract from the other. We can all work on many issues simultaneously. Even the U.S. Congress is able to do so by considering both equal marriage and equal treatment in the workplace. One issue doesn't negate or over-ride another. Furthermore, for Heinze to call the protesters "negative" is a slap in the face to GLBT people who fight against injustice everywhere. If he expects me to sit back and not be "negative" when members of my community are being discriminated, he's terribly, terribly mistaken.

"Trans-erasure" "Gay Supremacist" Gay misogyny? Am I being melodramatic? Well lets go to gay blogs that have picked up this story who have published a empathetic view....

That's not for a lack of trying. I tried to get gay blogs to speak about this when it the story first broke.

And more recently so has Dan Gonzales:

@fakedansavage On Sunday Denver queers protested outside The Wrangler, a gay bar which has a transphobic door policy https://t.co/HSPGs8E1qs
— Daniel Gonzales (@ColoradoGayDan) November 13, 2013

If we are to win this battle for equality we must be willing to conduct painful introspection and open, civil dialogue. Without it we stop recovering from the Barney Frank era and splinter once again. There is no LGB without the T.

The following bloggers and sites have since joined the conversation.

Thank you Andrés Duque ‏@Blabbeando for retweeting and asking, why?

Thank you OUT Front Co!

Thank you Andy!!! love ya

Posted by planetransgender at 12:58 PM No comments: Links to this post