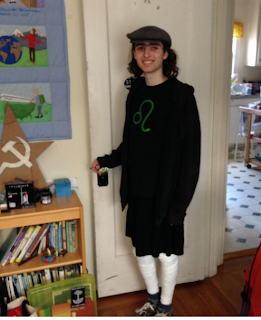 Wearing a skirt and a smiling Agender Sasha Fleischman returned home yesterday after spending weeks in hospital recovering from burns.

Eighteen year old Sasha was asleep on the way home on a public transit bus when they skirt was set on fire. The surveillance video shows 21 year old Richard Thomas committing this act of violence but it has not been released by police who say its just too graphic.

Sasha has had tremendous support and love from their school who organized a community skirts for Sasha day in which everyone, even school officials, gladly participated by wearing a skirt.

We are glad you are home Sasha.


Posted by planetransgender at 1:19 PM No comments: Links to this post

"I am enough" project by Kye Allums pays it forward 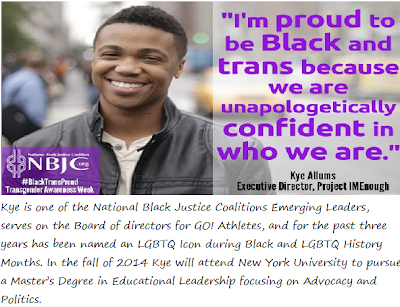 While a sophomore in 2010 at George Washington College Kye informed his school he was transgender. While he remained on the woman's basketball team it was with the understanding he would not be allowed to begin HRT and for some reason, forgo SRS.

Kye has decided to pay it forward with Project I Am Enough a storytelling platform dedicated to promoting self-love, acceptance, and respect for everyone on the gender spectrum.

The end goal of the project is to help ten people financially who are just beginning transition in 2014.

Kye on the Go Fund me project: "As a shy, quiet, and closeted teenage girl growing up in Minnesota, I truly believed that I was the only gay person on the face of this earth. I would spend countless nights crying trying to figure out how I could be “normal”. I wanted to be like everyone else. It wasn't until later that I realized that being like everyone else wasn't an option, I could only be me.
Going to George Washington University for basketball gave me an opportunity to be around people that helped validate my identity. I was misinformed. There ARE other gay people in this world! Although that made me happy beyond belief I still felt like something was off, and I didn't know why. I had no words to express how I was feeling."

"All of that changed when I walked into my Human Sexuality class. Right in front of me was a panel of LGBT people sharing their stories. For the first time in my life I was able to hear from a transgender man as he talked about things that he had experienced throughout his life. I now had the vocabulary to explain how I was feeling. I’m a transgender man!"


Male to female and female to male know how it feels to feel like your feet are facing backwards.


Another great way to support our community is through K.Page Productions which has produced a 2014 TransMan Community Calendar from all over L.A. county showcasing their name, contact information and business details.

Posted by planetransgender at 11:48 AM No comments: Links to this post