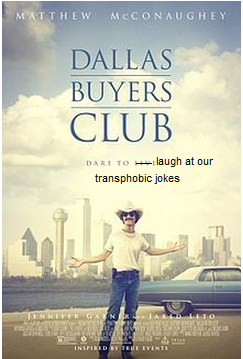 The Oscar for best supporting role goes to Jared Leto for his portrayal of a drug addicted trans hooker who's fictional character "Rayon" was written into the story line as a tragic joke in "The Dallas Buyers Club".

I wanted to experience this movie fully so I watched it with my longtime best friend and HIV/Aids activist Pamela Curry at the Angelika theater in Dallas Texas. I picked this theater purposely because of its proximity to the gayborhood and its indie motif.

What I couldn't have anticipated was the hostile looks Pamela and I received while we seated ourselves in the theater. People openly glared at us. That was just a taste of how othered we, and especially Pamela would come to feel. Much of the movie centered around what we understand as Parkland hospital. The same hospital where I visited Pamela a couple years ago when she was as close to death from aids as a soul could possibly be. The same hospital that was incredibly inhuman to her and has historically treated trans people so egregiously.

No one even snickered at the homophobia Woodroof displayed but there was no denying the humor in Woodroof's transphobic comedy. REALLY?

Nearly every time Rayon was shown with stubble, every time she was misgendered.

When the audience laughed out loud when Woodroof pointed his gun at Rayon's crotch and threatened to "give him the sex change he always wanted." After all who doesn't find shooting off the genitals of a trans woman hilarious?

I cried when Rayon passed away. It was tragic. Rayon, Pamela and I weren't ever going to be remembered as anything but a joke.

There weren't any doctors weeping as Pamela neared death at Parkland I can tell you that. In the movie Dr. Eve Saks sorrow was pure unadulterated fantasy to assuage those who laughed at Rayon who might have had a twinge of remorse for doing so.

I cried when when Woodroof died. I was just like him back then when the horror of the AIDS epidemic became undeniable. I rode steel horses, flew in infantry helicopters and fucked woman. Only I didn't just have sex with woman. I had sex with men but promised myself I would never do it again. (yeah right) And I was scared to death on the inside while feeling religiously smug that perhaps god's will was being done as the priests had alluded to.

I was crying because my best friend was hugging me and looking at me compassionately. She understood even as I was confessing this.

Pamela wasn't nearly as emotionally moved by this movie. She told me because she had lived that life personally.

And its damn time the world knows something. Trans people are not transphobic jokes and we damn sure do not need your pity. And we damn sure don't need you writing us into a story for those reasons. A story which will be remember for good or for bad as having some historical truth.

All in all I would give this movie five stars for all it is, and all that it's not. A must see. Amazing acting. Just not reality. Offensive to trans people? Perhaps but in any case an opportunity to be introspective and maybe like me, come clean about internalized bigotry.


Posted by planetransgender at 8:50 PM No comments: Links to this post

Hacking GIC Transgender Transition In the UK: An ezine by Mascara and Hope 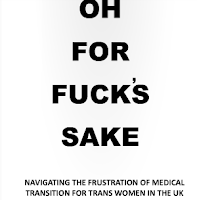 Mascara and Hope will help you hack the complicated, institutionalized, incredibly long, albeit free process that will eventually align your body and soul with your authentic gender. Its written in such a way as forewarn you about the potential tripping points and how to deal with those who's paycheck comes from delaying your transition. Universally those people are known as... 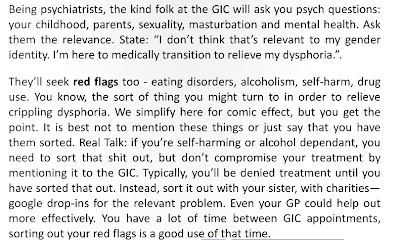