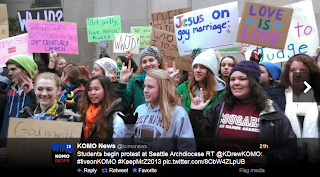 Via The Pennsylvania Student Equality Coalition (PSEC) "Hundreds of students at a Seattle Catholic school held a “sit in” to protest their vice principal being forced to resign because he married a man, according to reports.

More than 400 students reportedly filled the lunch atrium of Eastside Catholic School, in the Seattle suburb of Sammish, to challenge school officials after Mark Zmuda fell out of favour with the church for getting married to his partner Dana Jergens last July".

Almost half of Eastside Catholic has walked off campus after a popular teacher resigned because he is gay. pic.twitter.com/6DjawGZjye
— Eric Jensen (@EricJensenKomo) December 19, 2013


We, the student body at Eastside Catholic School, have experienced an egregious injustice which was inflicted by the Roman Catholic Archdiocese of Seattle. Our beloved vice principal, Mr. Zmuda, was terminated by the Archdiocese as a result of his marriage to another man. The student body is outraged that an incredible administrator, coach, and human being was fired solely because of his love and marriage for another human being. We are uniting in order to change the Catholic Church’s opposition of gay marriage. It is time to revisit the policy and act as Jesus would have, loving and supporting every person regardless of their marital status. United, we want this policy changed so that the Catholic Church can achieve its mission of acting with unconditional love in every situation.


Eastside Catholic High School Vice Principal Mark Zmuda was forced to resign because he married his partner. His students had a message to the Archbishop, courtesy of Macklemore.

Posted by planetransgender at 1:54 PM No comments: 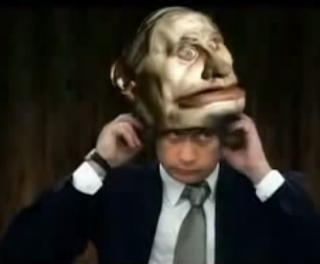 Russian president Vladimir Putin  recently pardoned hundreds of 'crimes' but all are asking, what crime?

Putin 'pardoned' Pussy Riot after two members served all but a couple of months of a two year sentence in prison.

This is the original undubbed video of the Cathedral Punk Prayer. This is what four feminists were unmercifully persecuted for? This was a prayer.

Green Peace Arctic 30 appreciate being released from prison after being illegally arrested in international water ask "what crime"?

So, someone is acting criminal but whom? Vladimir Putin it's you and NO we do not offer you faux amnesty. Putin hopes to obfuscate his tyrannical rule before the 2014 Olympics by freeing hundreds of Innocent people.

Putin, you may be largely successful in eliminating independent media in Russia but you will not do this in the free world. One Russian from Moscow has published on planetransgender "From the citizens of Russia - to EU citizens: Speak out against Putin's illegitimate regime".

Meanwhile as Putin directs the continued criminalization of LGBT people in Russia he is also using it as a tool in foreign countries in a plot to make them become reliant on his 'generosity'. Putin's god son just did exactly that in Ukraine by associating LGBT people with the west he vilianize us and rallies popular support. 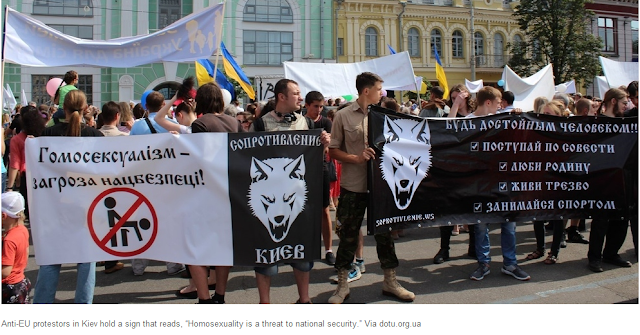 Recently Ukraine 'choose' to align with Russia after unreal demands for a EU bankroll was denied. These actions were documented here.


KIEV, Ukraine — In recent weeks, billboards with images of same-sex stick figure couples holding hands began to appear on the streets of the Ukrainian capital. The text warned: “Association with the EU means same-sex marriage.”

The group behind the posters is Ukrainian Choice, an organization funded by Viktor Medvedchuk, a wealthy businessman and former parliamentarian who is so close to the Russian president that local media routinely allude to the fact that Vladimir Putin is his child’s godfather. Medvedchuk created the organization with the sole purpose of lobbying against Ukraine strengthening its ties with the European Union — and is stirring up opposition to LGBT rights as part of the process.
Since passing the “homosexual propaganda” law this summer, Russian leaders have increasingly used opposition to gay rights — along with an ostentatious embrace of the Orthodox Church — to define the country in opposition to the West. Now its homophobic nationalism is moving west as part of Russia’s campaign to retain its influence in the former communist nations being courted by the European Union.
The big testing ground is Ukraine, which is currently in a tug of war between the two sides. The EU wants it to sign an association agreement deepening ties — and has been urging it to release a prominent political prisoner as proof it is ready to move toward the west. Russia wants it to join a Moscow-led customs union instead — and has been warning of dire consequences for Ukraine’s “traditions” if it decides to forego integration with Russia in favor of closer ties with the EU. At the end of November, EU and Ukrainian officials are due to meet in the Lithuanian capital Vilnius to sign an association agreement, formalizing bilateral relations with the bloc.

The chilling history of Vladimir Putin and what we can expect from him:

Posted by planetransgender at 11:35 AM No comments: