Are "Living Dolls" Men who wear feminine rubber suits under the Trans Umbrella? 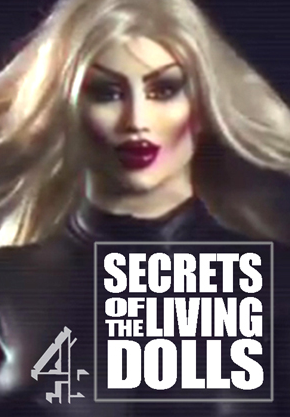 To be clear these men are not transgender, "Masking" is a 'weird' cisgender fetish.

Trans people are on a quest to live authentically, something that could never be done behind a mask. Sentiments like these were expressed by my friends over and over after I broached this subject yesterday after seeing this article at the Daily Mail which began with this:


With her long blonde locks, curvaceous figure and elfin features, 40-something Sherry is a woman few men would turn down. But there’s a catch. Sherry isn’t really a woman at all. Instead, she’s a retired property developer from California named Robert.

But, let me play the devils advocate for a moment and drop my trans privilege.

So it's perfectly acceptable for trans woman to wear breast forms and trans men to wear penis prosthesis but it's troubling, even weird when one wears a rubber body suit? After all, one of the major purveyors of these suits FemSkin is loaded with transgender links. Maybe there are already many trans identified people masking? And who am I to judge all of humankind transkind and cisgender?

My 2 cents? I believe in live and let live but for the life of me I do not understand what motivates people to do this. It also weirds me out. Sorry, guys but masks do that to me.

One friend commented that this pastime reminds her of autogynephilia that formally was the basis of the DSM prognosis of transsexualism:

The DSM V no longer includes Blanchard's abhorrent stigmatization of trans people due to our increased visibility and that's not something that could be accomplished behind a mask.

Or maybe perhaps social perceptions can be changed by someone behind a mask. The annual Rubber Doll World Rendezvous has an explicit set of rules that for the life of me appear focused on improving the worlds perception of "Masking". After all, Look what Anonymous is accomplishing and no they didn't 'weird' me out.

So are Living Dolls under the trans umbrella or just cis people engaging in harmless Cosplay?


Posted by planetransgender at 9:16 AM No comments: Links to this post