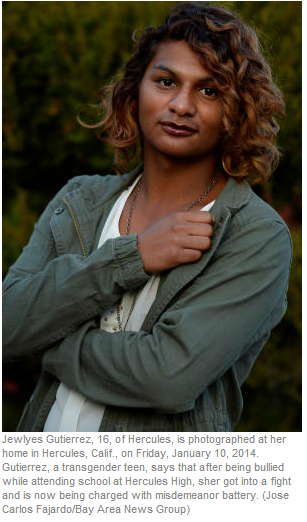 Looks like a way out for the DA caught using his office to persecute a transgender teen for something that happens nearly every day in school yard somewhere in America.

After years of bullying and the schools inaction on confronting it Jewlyes Gutierrez, a transgender high school student finally snapped and struck back. The incident, where she was attacked by three students in the schools court yard gained national attention after a video cell phone video went viral.

After the fight all four girls were suspended and later made public apologies to each other, which in nearly all other cases would have meant a resolution was found.

But not in this case where a transgender student5 was involved.

The DA decided to press assault charges against Ms. Gutierrez shocking her friends, family and even the District school board president. They all wanted to know why and a online petition was began by her sister. It now has now has over 138,00 signatures making it the fastest growing petition in California and quickly becoming one of the most signed petitions ever for Change.org.

"Whenever cases are pending like this, the attorney and the district attorney meet and talk about ways of handling the matter," he said. "And that's what we're doing."

Cabral and deputy public defender Kaylie Simon said late Wednesday afternoon that they were considering enlisting the help of the National Center on Crime and Delinquency to possibly facilitate a "restorative justice circle" for all students involved, which would allow them to accept accountability for their roles in the bullying and the fight, and learn from the process. But they said they weren't sure whether charges would be dropped.


Posted by planetransgender at 10:24 AM No comments: Links to this post