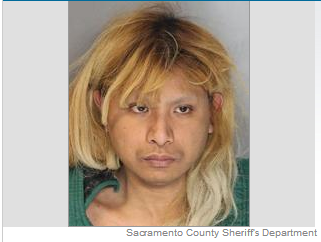 In a breaking story, a woman identified by the Sacbee as transgender has been booked by Sacramento police on suspicion of murder.

The video of the shooting which occurred Thursday night has no sound but somehow the police have already determined the shooting was not in retaliation to hate speech.

She is accused of opening fire on a man in his 50s inside an outbound Gold Line train as it came into the Archives Plaza station at 11th and O streets.

The man, who suffered gunshot wounds, exited the train before falling to the sidewalk, according to Regional Transit officials. He was pronounced dead at the scene.

Braun is being held in segregation in a male jail reportedly because of her transgender status.

Note: planetransgender does not normally use just one source for stories such as this, especially since the trans woman is not self identifying, but will in this instance as Sacbee is a historically a very reliable source.


Posted by planetransgender at 8:37 PM No comments: Links to this post 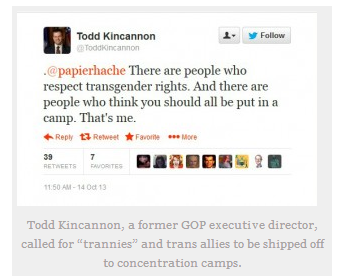 Tod Kincannon, the former head of the SC GOP said in October 2013 that his final solution for transgender people would be a Nazi internment camp has gone on the war path again. This time he's attacking the hope of Texas, Wendy Davis calling her and anyone else who would defend her a "Whore" on Twitter.

I hope this serves a reminder to everyone, myself included how important the upcoming elections are.

Posted by planetransgender at 6:16 PM No comments: Links to this post

Ms. V's partner places most of the blame of her suicide on the Grantland article outing her 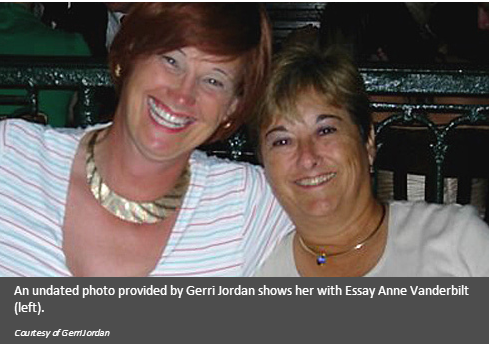 The impending publication of "Dr. V's Magical Putter" which exposed Essay Anne Vanderbilt pre transition life to the scrutiny of the world was the final straw according to Gerri Jordan, her former romantic interest and business partner at the time of her death.


"The two had started a business to sell a golf club Vanderbilt had designed — the Yar Golf putter, which they billed as a revolution in the science of the game. While their big break remained elusive, the putter had been mentioned on TV by a prominent golf announcer, and a reporter from a national sports and pop culture website was doing a story."

"But Vanderbilt had grown nervous about the story. She feared the reporter was focusing on intensely personal elements of her past that he had discovered, despite her request that he write only about “the science, not the scientist.”

Despite being evident that the timing of Ms.V's suicide corresponded with her outing  Grantland editor Bill Simmons explicitly denied all culpability publishing a lengthy faux Mea culpa 'lawyers apology.'


She blames the reporting of the story for “90 percent” of the timing of Vanderbilt’s suicide — but not for the suicide itself. Vanderbilt had attempted to take her own life in 2007 and in 2008, Jordan said, and she lived believing that her friend might try again.

“I don’t hold any grudge, really, since she’s tried it before,” Jordan said as her eyes filled with tears that did not spill over. “So how can I say it’s all his fault, when it’s not really all his fault?”

She paused for a long breath before telling The Republic, “I mean, eventually she would have anyway. ... It just so happened to be the timing with the article".

Grantland author Caleb Hannan was vigorously defended by Simmons in his 'appology" saying..."Ultimately, it was my call. So if you want to rip anyone involved in this process, please, direct your anger and your invective at me. Don’t blame Caleb or anyone that works for me"... asking that not be vilified asserting that in his innocence he had been unfairly targeted for hate even receiving death threats.

It has been since learned that Caleb Hannan is getting sued for a previous " [ ]..article contained innumerable inaccuracies and untruths concerning the testimony and evidence in the trial of Liysa Northon and also included various unfounded personal attacks ..[ ]"

It's unconscionable that Simmons chose to publish this article knowing Miss V had a history of attempted suicidal history. I also REJECT Simmons's assertion that he has been completely ignorant of transsexualism during the nearly year-long period of writing and decision-making process, whether to publish or not.

Caleb’s biggest mistake? Outing Dr. V to one of her investors while she was still alive. I don’t think he understood the moral consequences of that decision, and frankly, neither did anyone working for Grantland. That misstep never occurred to me until I discussed it with Christina Kahrl yesterday. But that speaks to our collective ignorance about the issues facing the transgender community in general, as well as our biggest mistake: not educating ourselves on that front before seriously considering whether to run the piece.

You can not tell me with all of the investigation, all of the 'trained eyes' not one person googled 'transgender'. NOT ONCE?


For 32 months and counting, we haven’t made any effort whatsoever to chase page views or embarrass people for rubberneck traffic.

Simmons take down that monument to capitalistic cooperate transphobia. The only ones benefiting by it's remaining online is Grantland and your parent ESPN.

Posted by planetransgender at 9:20 AM No comments: Links to this post