Speaker John Boehner tells Gay Caucus "No way ENDA will get done this session" Like he'll move it next? 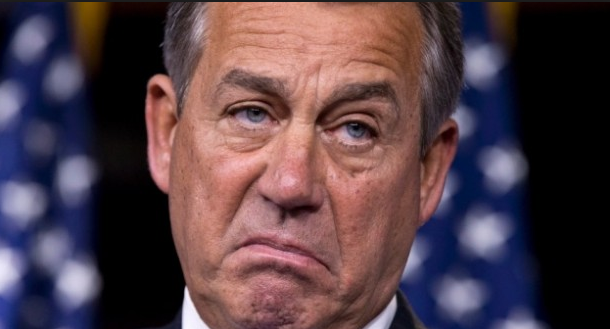 History was made in the fight for LGBT equality this year with the first ever passage of ENDA in the Senate. All was left was the Republican controlled House.

It was revealed an off the record meeting occurred 'sometime last week' where Boehner announced that his posse of bill killers would shoot a hole through yet another American dream.


House Speaker John Boehner (R-Ohio) told attendees last week at his first-ever meeting with the LGBT Equality Caucus there was “no way” the Employment Non-Discrimination Act would pass this year, according to a gay lawmaker who attended the meeting.

Rep. Mark Takano (D-Calif.), who’s gay and one of the caucus co-chairs, volunteered information Tuesday night about the meeting in Statuary Hall of the U.S. Capitol when the Washington Blade asked him about his views on the absence of the ENDA from the State of the Union address.

“A number of us did meet with, actually the caucus met with Speaker Boehner,” Takano said. “He said no way was it going to get done in this session.”

Calling the discussion between Boehner and the lawmakers “a historic sort of meeting,” Takano later clarified he was referring to the LGBT Equality Caucus, a 113-member group of lawmakers committed to advancing LGBT rights, and said the meeting took place “a few days ago” or last week.

Read more at The Washington Blade

So Boehner meet secertly with the Gay Caucus? Sound familiar? It should.


Posted by planetransgender at 6:00 AM No comments: Links to this post