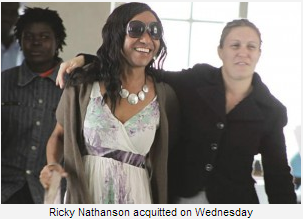 When transgender woman Ricky Nathanson woke that Thursday morning, she probably would have never suspected her name would become recognized worldwide. And Ricky almost certainly wouldn't have guessed she was to become the next target for extortion by the corrupt ZANU PF party.

Ms. Nathanson existing the women's room at the Palace Hotel was was stopped from leaving by ZANU PF party youth leader Farai Mteliso and crew that demanded money from her in lieu of calling the police. However, she wouldn't give him any, but it didn't get better after the police arrived. They remanded her and forced her to strip, purportedly to ascertain her gender robbing her a again this time of her dignity.

Ricky had her day in court and proved without a shadow of doubt she was legally entitled to use the women room. What remains to be seen if the court press's charges against ZANU PF party youth leader Farai Mteliso or the police that made her strip and humiliated her.

SW Radio Africa reports the Magistrate Abednico Ndebele told Ms. Nathanson“It appears the State is still yet to make a decision on the charge, and according to what’s in court, there’s no offence in anyone entering a female or male toilet… For now you can go and the State will call you if it needs you,” Ndebele told Nathanson.

However Zanu PF thug, Farai Mteliso, who effected a citizen’s arrest on Nathanson at the Hotel was not impressed.

Mteliso told reporters he was surprised prosecutors claimed he was in Harare when he was in the court gallery.
“The magistrate presides on a case of a man who comes into court wearing a dress, which obviously shows that he is practicing homosexuality,” Mteliso said.

“Do you think that if President (Robert) Mugabe was in this court that man would have come out of court?

“Just imagine how many women this man has seen naked by entering ladies toilets.

“I think he has even seen my wife’s nakedness since I usually go with her to drink at the Hotel.”

Ian Maseko, director at lobby group Sexual Rights Centre, said Ricky’s court case shows how the legal system is being used to harass those perceived to be different.

“The way Ricky has been treated is inhumane. The constitution guarantees equal rights and respect for the dignity of all citizens and we should all be affirming that,” Maseko told SW Radio Africa Wednesday.

Posted by planetransgender at 8:32 AM No comments: