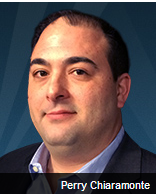 Fox News channel,founded by the infamous media mogul Rupert Murdoch, gets their news from affiliates which are independently owned, hence the vast difference in the quality of their reporting. There's 'fair and balanced' and then there's the likes of reporter perry chiaramonte.

I know you are thinking OK Fox already resides in the gutter, how much lower could they possibly go?

Perry chiaramonte who describes himself as a 'recovering tabloid writer' on twitter has found a way to make the lowest of base look down.

Posted in 'education' chiaramonte goes out of his way to consistently misgender, belittle and abuse a teenage transgender girl, who he is well aware of, or ought to be, is at a critical point in her life. Teens are known for their emotional sensitivity and impressionability especially trans teens who have a high percentage of suicides. Having this sort of hate forced down on her at this time of her life is reprehensible.

Some feel that having Cordova-Goff play with young female athletes puts out an unfair advantage and sets a bad precedent.

“It’s intolerable of this young man to not accept an equal standing of girls playing girls,” Randy Thomasson, president of SaveCalifornia.com, told FoxNews.com. “It is categorically unfair to biological girls to have to compete with a sexually-confused young man with stronger upper body strength, who makes the game board decidedly 'unequal.'"


So how did the team, students, school officials and town feel about cheer squad member Pat Cordova-Goff, 17, who is also the student body president and maintains a 4.0 grade average playing on the girls softball team?

“There is no issue for me,” West Covina softball coach Jesse Mendez said. “Could there be a competitive advantage? Sure, but softball is a pretty skillful game. There aren’t many (recreational) softball players. These are competitive players who have played all their lives, and a lot of them are physically built. They know what it’s like to play (with) the best of the best, so I have no concerns.”

“The state has rules. CIF has rules. The school district has rules, and if the rules say a (transgender) athlete can play, I’m fine with it as long as it’s within the rules,” he said. “The bottom line is, you have to play the game, and softball is very competitive.”


The district had positive words to say about Pat’s tryouts according to the SGV Tribune:


“Our district encourages all students to participate in extracurricular activities and athletics, and we want to ensure that every student has access to these components of our educational program,” Azusa Unified Superintendent Linda Kaminski said. “These type of activities enrich the school experience for our students.”

The LA Times reports that there have been no appeals filed with the The California Interscholastic Federation so evidently no one has a problem with her playing except one gutter reporter.

perry chiaramonte, may I offer this to you? I too have an addictive personality so I know what it's like to slip and how hard it is to recover.. My advice to you? Seek friends, eat and rest well, develop a good support network and above all, seek professional help.

Posted by planetransgender at 7:45 PM 2 comments: Links to this post 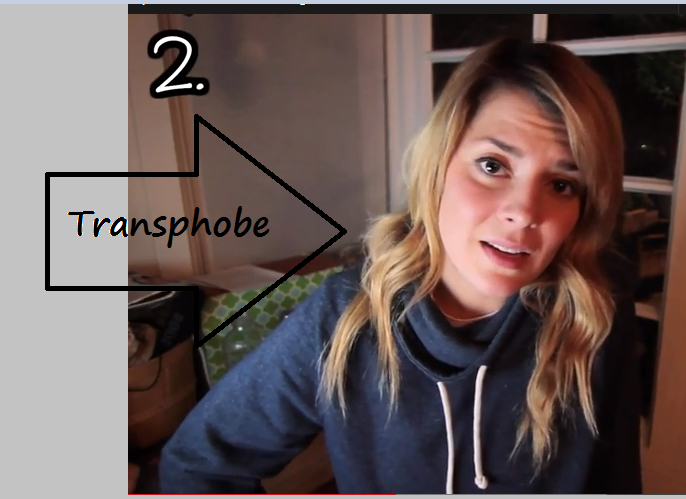 Grace Helbig a popular you tube Vloger is trying to bring attention to a new feature length movie she acts in by insulting and invalidating transgender woman. Evidently she doesn't respect us or care that we are human beings.

In this you tube she calls a 'day of education' she answers a tumblr question, 'how do I tell a guy I don't want to go out with him but nicely" explaining "tomorrow's Valentine's day and you might be asked out on dates with people you don't necessarily want to go with, or don't fell attracted to and its always very awkward and you don't want to make that person feel bad because they put themselves out there and made themselves vulnerable by asking you first place. So 25 things you can say that avoid saying yes to the date but in a relatively nice and or non meanish way."

Number 1. "something something flappy bird"

Number 2. "Thank you so much but I'm not actually no actually a woman, a girl or female. I'm packing peanuts if you now what I mean."

She then goes on to insult homeless people and other assorted folks.

I would say if you find this as offensive as I do report her on YouTube, but by all means do not buy her video.


Posted by planetransgender at 2:40 PM 4 comments: Links to this post 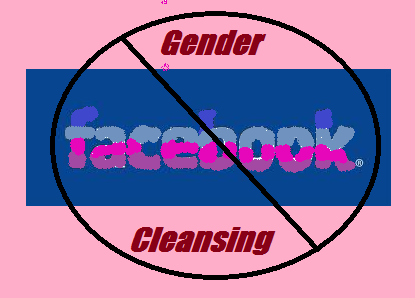 As most everyone already knows Facebook has changed our options for displaying gender. Now we can pick one, or more, that associates us with who we are.
What I didn't know was how diverse those options are until exploring it today. But who was behind these changes?
Up until a few years ago Facebook was eliminating profiles that didn't match official documentation and scrubbing pictures of post operative transgender males.
Facebook used to engage in "gender cleansing", virtually unheard of until We demanded facebook reinstate Dominic Scaia. 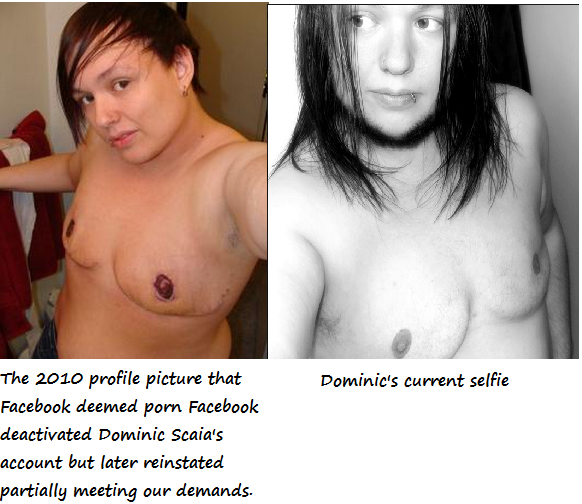 Facebook ended up reactivating Dominic's profile but told him he couldn't re post his picture siting the "Nudity and Pornography" paragraph of their Community Standards.

The trans community had won a partial victory getting Dominic reinstated, but facebook still considered a topless trans man pornographic invalidating his gender.

Facebook is apparently aware of societies desires as they have left Dominic's current picture intact. Dominic, you are a pioneer thank you.

But could it be perhaps his latest image hasn't been reported, which begs these questions. Will the trans communities new found facebook respect allow us to post selfies with out violating Facebook standards? Is facebook actually going to allow us to validate our unique gender(s) with images?

What if no one had heard about Dominic's deletion? Some in the trans community had never heard of facebook deleting trans people's accounts and said it was simply a contrived story or if it had actually happened, was atypical behaviour on facebooks part.

"[T]ease apart the threads [of the natural world] and the pattern vanishes. The design is in how the cloth-maker arranges the threads: this way and that, as fashion dictates. [...] To say something is meaningful is to say that that is how we arrange it so; how we comprehend it to be, and what is comprehended by you or I may not be by a cat, for example. If a tree falls in a park and there is no-one to hand, it is silent and invisible and nameless. And if we were to vanish, there would be no tree at all; any meaning would vanish along with us. Other than what the cats make of it all, of course." William Fossett

Not to imply that feline observations are useless, they are, its our ability to understand those observations that should be value rated

Many used to say they were guilty social of T-genocide. So what brought this wonderful change about.

Scrolling down the Facebook Diversity page I see the culprit

The GLAAD staff came to visit us at Headquarters today. GLAAD amplifies the voice of the LGBT community by empowering real people to share their stories

Sarah Kate Ellis and Wilson Cruz from GLAAD came to Headquarters today for a visit and to meet with some of our employees. "GLAAD amplifies the voice of the LGBT community by empowering real people to share their stories"
I'm sure this change with all the gender options has been brought about with considerable effort and skill.  GLAAD with whom we have a love hate relationship with, thank you for helping to bring about this wonderful improvement.

So how do you make these changes. First click the "Edit" button on your profile banner then scroll down to your basic information. You can also edit so you don't accidentally out yourself. This change will bring up some controversy from within the community. Do we need to 'other' ourselves identifying as under the trans umbrella or is it a better choice to let sleeping gender pronouns lay?
Whatever you decide its a personal choice. Its right for you. 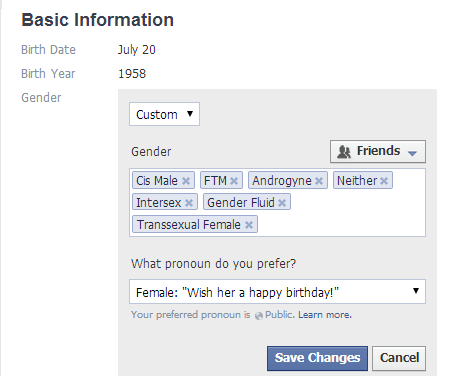 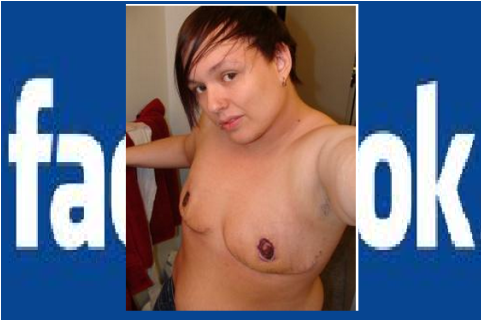