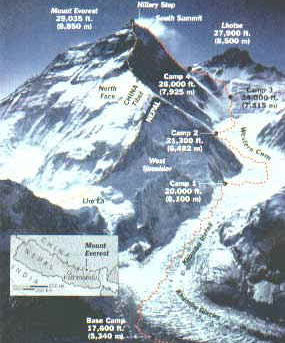 Manoj Shahi Monika, a third gender from Kailali, Nepal could be the first documented transgender person to climb Mount Everest, but to do that the 35 year old must first make summit. The climb made famous by the book Into Thin Air is fraught with dangers that have maimed and killed many who have tempted fate.

There is a saying in mountaineering "Getting up is optional and getting down is mandatory."

“I cannot afford to miss the opportunity to make the record for climbing Everest as the member from the LGBT community,” said Monika, who wants to be listed in the Guinness Book of Records.


Monika dreams to flutter the national flag together with a banner of Blue Diamond Society, an organisation working for LGBT community in Nepal, at the top of the peak.

However, Monika isn't the first transgender person to be on Mount Everest, not by a long shot. Nineteen years before Hillary and Norgay successful summit, British climber Maurice Wilson attempted and possibly reached the peak. Little is known or written about Wilson's 1933 climb because she was transgender, or mad, as gender diversity was deemed then.

A transgender woman, Jan Morris, known at the time as James, had the coveted role as the sole reporter on the mountain when Hillary and Norgay made the first known successful climb.

I haven't been able to locate any further information about Monika's expedition but being the Mount Everest aficionado that I am I will certainly update this when I learn more.

Pussy Riot horse whipped, pepper sprayed by police in Sochi and attacked in a McDonalds

Russian punk group Pussy Riot is attacked by Cossack militia as they try to perform under a sign for the Sochi Olympics.

Cossack militia attacked the Pussy Riot punk group with horsewhips on Wednesday as the group staged an impromptu performance under a sign advertising the Sochi Olympics.
Six group members — five women and one man — donned their signature ski masks and were pulling out a guitar and microphone when at least 10 Cossacks and other security officials moved in. 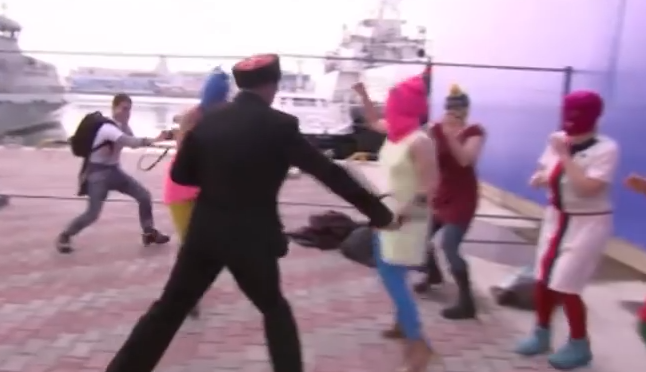 One guard appeared to use pepper spray, another whipped several group members while others ripped off their masks and threw the guitar in a rubbish bin.

Police arrived and questioned witnesses, but no one was arrested.

"No one was arrested" even though the attack on Pussy Riot violates Federal law adopted by the Duma "ensuring the implementation of the Constitution of the Russian Federation established the rights of Russian citizens to assemble peacefully without arms, hold meetings, rallies, demonstrations, marches and pickets."

Then in March Putin's murderers attacked Maria and Nadia while they were eating in a McDonald's after visiting prisoners in the stalag they were jailed in. Western soldiers, take a good look at the thugs attacking these woman. Its a very good possibility the next place you see them will be on the battlefield. Be ready.

Posted by planetransgender at 8:54 AM No comments: