Middletown HR say police did not discriminate against transgender officer 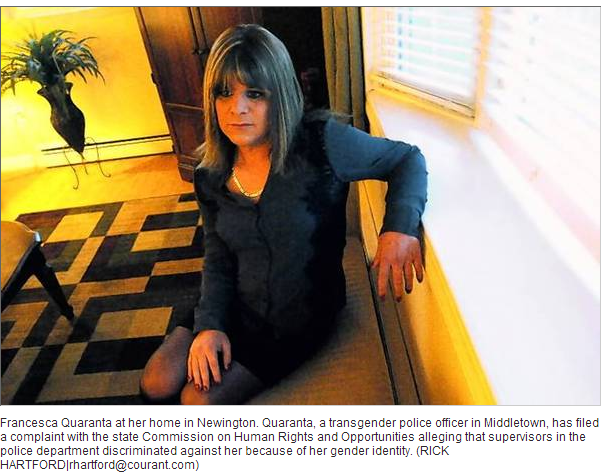 Officer Francesca Quaranta, 46,  began transition in 2011 while employed by the Middletown Connecticut police. In 2013, Quaranta filed a complaint against the department saying they had created a hostile work environment.

Quaranta said the department micro managed her scrutinizing every moment she was on duty. She also said that she was unfairly targeted for her feminine accessories, the same sort that other female officers routinely wore while on duty.

"While officer Quaranta's transgender transition is a new experience for her and the Middletown Police Department, it is believed that the department is handling her transition in a professional manner," Faith Jackson, the city's human relations director, wrote in a letter to the mayor.

Mayor Daniel Drew said he and Police Chief William McKenna made it clear Quaranta was to receive equal treatment and supervising officers received training on the issue. The mayor said a sergeant also was given a 10-day unpaid suspension over a remark he made about her.

"We've taken this very seriously from day one and will continue to take it seriously," he said.
Quaranta said Thursday she disagrees with the city's findings and was not surprised, saying officials want to protect the city from liability.

"I'm hoping that the state of Connecticut is much more open minded and actually looks at documents and actually listens to what I'm saying," Quaranta said.
A Middletown police officer since 2004, she said she loves the job but isn't sure she can return to the department.
"I think the harassment will just continue," she said. "Actually I think it will be much worse this time."

Prosecutors: Oregon woman beat 4-year-old son to death because she thought he was gay (via Raw Story )

Prosecutors said an Oregon woman beat her 4-year-old son to death because she feared he was gay. Zachary Dutro-Boggess was hospitalized Aug. 14, 2012, the day after his fourth birthday, with trauma to his abdomen that caused tears to his bowel, and…

read more after the jump
Posted by planetransgender at 6:35 AM No comments: Links to this post