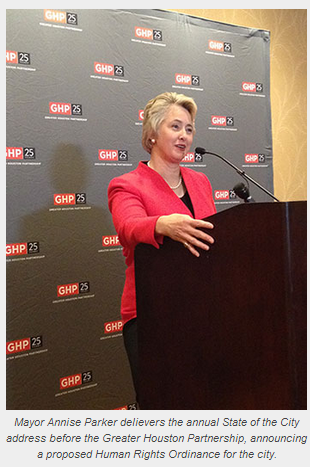 Houston is the last large city in Texas without an ordnance protecting it's LGBT citizens from discrimination. Mayor Parker announced in her state of the city address, she intended to change that. Mayor Parker, an out lesbian signed an executive order in 2010 which extended protections to transgender city employees in city-owned buildings but the fact that there no city ordnance's protecting transgender and gay people in public buildings did not escape the community's attention.

Mayor Parker intent on getting the ordinance passed during her final two years said "A young African-American man should not be turned away from a club on Washington Avenue. A returning veteran with a service dog should not be denied service at a local restaurant. An older woman should not be denied a job on a city contract. And yet these things do happen in the friendliest, most welcoming, most diverse city in the United States. And yes, a gay or transgendered individual should have the same rights enjoyed by all other Houstonians."

According to Houston Public Media the  Houston Area Pastor Council has already begun campaigning against the proposed non discrimination ordinance presumably because it would be transgender inclusive.

At its regular monthly meeting on April 2, the Houston GLBT Political Caucus membership approved a statement in support of a proposed Human Rights Ordinance for the city of Houston. The statement reads:

“The Houston GLBT Political Caucus supports the City of Houston in passing a citywide Human Rights Ordinance that will protect and safeguard the right and opportunity of all persons to be free from all forms of discrimination, including discrimination based on real or perceived race, color, ethnicity, national origin, age, sex, gender identity, gender expression, religion, sexual orientation, disability, marital or family status and veteran status. We support an HRO that ensures every Houstonian has equal access to employment, housing and public accommodation.”

“Houston is a world class city,” said Caucus president Maverick Welsh. “It’s past time that we updated our city ordinances to reflect our position as the economic and cultural capital of Texas. Every Houstonian deserves the right to work and provide for their family without fear of losing their job or home because of who they are or who they love.”

The Houston GLBT Political Caucus is the South's oldest civil rights organization dedicated solely to the advancement of gay, lesbian, bisexual and transgender equality. Founded in 1975, it is the largest GLBT political organization in the city of Houston and Harris County.


Posted by planetransgender at 10:02 AM No comments: Links to this post