Debunking MDPetition.com Neil Parrott falsehoods for opposing the Fairness for all Marylanders Act 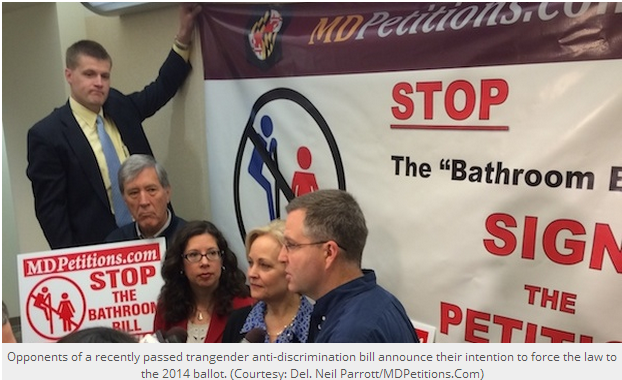 Maryland Republican Neil Parrott has launched an online petition drive to force a vote on the states new transgender inclusive bill, Fairness for all Marylanders Act of 2014.

During the conference Del. Parrott and House Minority Whip Kathy Szleiga said they oppose SB 212 saying it "opens bathrooms to predators, not necessarily transsexuals, but predators as they will take advantage of this bill and use the opposite gender bathroom and owners of those restrooms, like the one right behind this wall, would have no legal recourse."

In 2011, Parrott and Szleiga voted against HB235, which was much like this law  except it didn't include public accommodations. Their contention that they oppose this bill because it includes 'bathroom' provisions and would have supported legislation without it is a lie. It's especially odious that they say they are doing so because they are concerned with children's safety citing fictitious or irrelevant incidents.

"The most egregious part of this bill will require businesses to open up their public facilities (bathrooms, saunas, shower rooms, locker rooms, etc.) so that men can use the ladies’ room and women can use the men’s room."

This statement from the MDPETITION.com website is not just fear mongering, its also unequivocally false.

From the bill's text: "The bill does not apply to a private facility in a place of public accommodation, if the place of public accommodation makes available, for the use of persons whose gender identity is different from their assigned sex at birth, a space that is functionally equivalent to the space made available to users of the private facility. The bill defines “private facility” as a facility (1) that is designed to accommodate only a particular sex; (2) that is designed to be used simultaneously by more than one user of the same sex; and (3) in which it is customary to disrobe in view of other users of the facility.


Post by Kelli Anne Busey.
There is a well-organized coalition supporting fairness for all Marylanders. One of which is TransMaryland whose leader Jenna Fischetti is working to educate the public. She explains the meaning of “gender identity” in this bill:

“Gender identity,” means the “gender-related identity, appearance, expression, or behavior of a person, regardless of the person’s assigned sex at birth.”

So, the Act’s definition of “gender identity” said Jenna "only includes an identity that is sincerely held as part of a person’s core identity."

"This definition was proposed by Republican Senator Joseph Getty, and is consistent with the definition adopted in 17 other states that have enacted gender identity protections, including Delaware, Connecticut, and Massachusetts."

Legislative efforts to include transgender people has taken place nearly every year since 1997. The effort to define the language that allows transgender people the same rights as everyone has been a arduous journey contrary to what Neil Parrott have you believe.

However given Parrott's tactics its important that the truth be known. Maryland should remain a fair place for all.


Posted by planetransgender at 10:39 AM No comments: