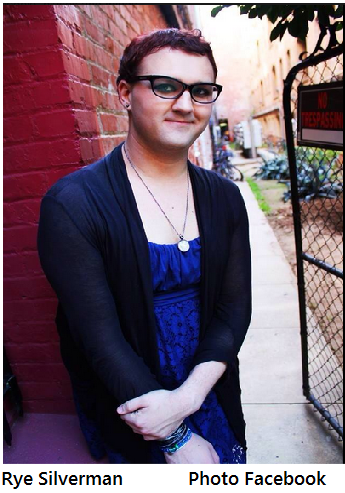 Comedian Rye Silverman wrote on Tumblr about being attacked on her way to the Los Angeles Pride in West Hollywood aka WeHo Pride. Later the prep was filmed bragging about the attack to Mo Fathelbab of "The Experiment" who was interviewing pride attendees and serendipitously recorded him confessing to the hate crime.

"I was just getting on the train to go down to Dyke Day as part of Pride weekend. As I was coming down the steps into the station I overheard a guy on the escalator yell “why the fuck are you wearing a skirt?!” I ignored it and just kept walking to buy my ticket.:

"As I’m standing there waiting in line this piece of shit puts his arm on my shoulder and says “Hey women wear skirts.” Because he’d put his hands on me I reacted out of instinct and grabbed him in case he was planning on doing any thing else. He must have only intended to walk away because instead what happened was I ripped his tank top (because of course this fuckwad was wearing a wife-beater) and then he started swinging at me."

Because when I defended myself my attacker said I was "acting like a man." #YesAllWomen
— Rye Silverman (@ryesilverman) June 7, 2014

"Hi mom and dad, you know that one thing you're constantly in fear of happening due to my being out? Oh hey it happened"
— Rye Silverman (@ryesilverman) June 8, 2014

From here on it’s kind of a blue but it basically turned into a fight. My glasses got flung across the room and we both hit each other a few times before both backed away from each other. He kept putting his fist out like he was planning to hit me again and he started yelling that I started it, that I came after him and that for someone who wears skirts I was “acting like a man,”which he said over and over again. I told him to get the fuck away from me and then some other guy coming off the escalator heard me and stepped in and told him to get away from me too and then a Metro employee showed up so I’m sure someone had gone to get him.

Thanks to everyone who has reached out or put the word out. I now know my attacker's name and will be speaking to a lawyer.
— Rye Silverman (@ryesilverman) June 8, 2014

I almost went home but I decided I couldn’t let him ruin my day or my pride weekend. I got my train pass and leaned against a wall to compose myself for a few moments. And then get ready to go down for the train and he’s right there at the bottom of the escalator. I took a wide path around him and got in a car on the other side of the train.

This all just happened less than an hour ago. I typed most of this in the notepad on my phone on the train trying to process it. Mostly I’m still shaken up that it happened at all, that it happened in broad daylight with a group of people around. But at the same time, I’m feeling super proud of myself for having stood my ground. I am not a victim. Not this time. Not ever.

We all love Rye Silverman here at The Experiment. She is not only one of our favorite standup comedians toiling away in the Los Angeles comedy scene, she is also one of our favorite people. (Check out the ‘Why Aren’t You Following?’ profile we did of her in April.) So it pained us to hear that some piece of shit (who is pictured above) attacked her at an L.A. Metro station on Saturday simply because she’s a transgender woman.

The thing that keeps flashing back to me about earlier today is how my attacker kept trying to say “you started it” when he was backing away from me.

The thing is that I can actually understand why in his simple mentality that he truly believes that’s true. Because basically he saw me as less than him, he saw me as someone who he had a right to put his hands on and he never ever expected that I would do anything in response to defend myself. In his mind I actually broke some sort of social contract where he thinks I’m just supposed to take it. That’s why he kept saying I was “acting like a man” for defending myself.

I really want to hear the version of the story he tells where he’s the hero and I’m the villain. I’m morbidly obsessed with that kind of mental process. But I hope that he’ll think twice before putting his hands on anyone else again.

And then a surprise hit the Internet in the form of a Funny or Die video — which featured the attacker… at fuckin’ L.A. PRIDE!

Holy crap!!! This video, 1:40 in, that’s the guy, this is the guy who attacked me. Notice he just says he asked me why I was wearing a skirt, no mention of him grabbing me and getting in my face. Anyone know this piece of shit?


Posted by planetransgender at 6:35 AM No comments: